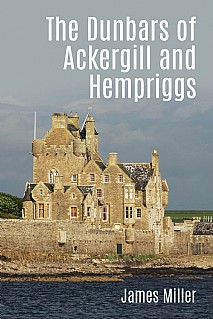 The Dunbars of Ackergill and Hempriggs emerged in the late 1600s as one of the largest landowners in Caithness. As such they played a major part in the history of the county, a role revealed in the family papers with their wide variety of documents, including personal letters and legal missives.

Readers will learn about the Dunbars selling Caithness grain in the Lowlands, coping with the effects of the last Jacobite rising, handling disputes with their neighbours, arranging elections, dealing with debt – and that is just in the 18th century. During the Napoleonic wars the Dunbars recruited a fencible regiment called the Caithness Legion that saw action in Ireland. At the same time the British Fisheries Society acquired land from the family and began to develop Pulteneytown as a major herring fishing port. An agricultural revolution swept over the estates, leading to the enclosing of fields, disputes over common land, evictions and refurbishment of farms.

In the mid-19th century, when the family home at Ackergill Tower was refashioned by the architect David Bryce, the Dunbars adopted the lifestyle of the Victorian country gentry as well as finding careers in the Empire. With family trees, photographs, maps and documents, the book presents an absorbing, intriguing and, at times, amusing account of the social and economic life of the Dunbars over more than three hundred years, using unique messages from the past, never before made public.

This will appeal to anyone interested in the history of Caithness, northern Scotland and Scottish history in general.

“The book safely landed on my desk this morning – thanks very much for swift delivery. ”
Pawel, UK
“Many thanks for speedy dispatch. ”
Camilla, Ireland
“The package and its contents were in perfect order. ”
Laurie, Australia
Dunbeath, Caithness, Scotland KW6 6EG, UK T: +44(0)1593 731 333 E: info@whittlespublishing.com