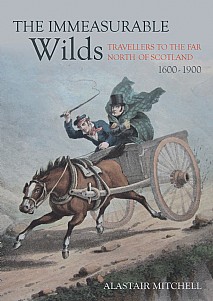 • Marvels at the intrepid qualities of the various visitors to this then unknown region and provides impressions of what it was like, as seen through their eyes

Towards the end of the 18th century the attention of mapmakers, explorers and travellers turned to the north of Scotland. The mountains that rise north of Stirling formed a formidable barrier for anyone wanting to visit the Highlands, and travellers to the Far North were even rarer: there were no roads at all into most of Sutherland, and Ross and Cromarty until the early years of the 19th century. Who did go there, and why?

This book follows the early mapmakers who gradually revealed the area, including Timothy Pont and Alexander Bryce who published the first accurate map of the north coast. General Roy covered the whole of Scotland for his remarkable ’Great Map’, and later, the indomitable and energetic General Colby dragged his reluctant Ordnance Survey team across much of the north, as documented by Robert Kearsley Dawson. Meanwhile, Culloden led to increased interest in the area, as is evident not only from the visit of Dr. Johnson, but also those from Thomas Pennant, Bishop Pococke and the Rev. Charles Cordiner, all of whom managed to reach the far north-west and leave fascinating accounts of what they found. The poverty that was apparent to these visitors from the south led to action from the British government, not least an important road-making scheme under Thomas Telford which is documented in this book using not only the official reports, but also an enthusiastic account left by the Poet Laureate of the time, Robert Southey.

With the new roads came the tourists, flocking to sites like Loch Katrine, in search of signs of Sir Walter Scott’s heroes and heroines. But it was only the bolder few who made it to the far north-west, men like the Rev. James Hall, ‘making love’ under the table at Caithness, or James Hogg, ever the ladies’ man at Lochs Duich and Maree. The book follows this story, which has barely been mentioned in popular literature, and delights in choice anecdotes from all these accounts, touching on a number of disciplines: cartography, early geology and botany. But above all, it gives a picture of this unknown region, as it seemed to those exploring it, an area of astonishing beauty, with inhabitants that showed notable warmth and generosity in spite of their poverty.

The book ends with an account of the Highlands Controversy, a debate that divided the geological community for much of the 19th century, culminating in discoveries that revealed that the area contained some of the most remarkable geology not just in Britain, but in the whole world.  Thus recognition was at last achieved for a region that contains some of the most striking scenery in the United Kingdom.

This will be of great appeal to everyone with an interest in Scotland and the Far North in particular, Scottish history and history of science, and those for whom pioneering travelling and exploration holds an attraction.

‘...a fascinating book that will be enjoyed by anyone with an interest in the north of Scotland. ... Alastair Mitchell's book is a wonderful and superbly-researched distillation of the travels and discoveries of three centuries of earlier visitors to the area...’ Undiscovered Scotland

'Whether you have an interest in Scotland’s landscape or her history, or if you are looking to read an informative text that reads like a novel; you will not be disappointed.' The Wittance

A Scotsman Returns
Paul A. Lynn