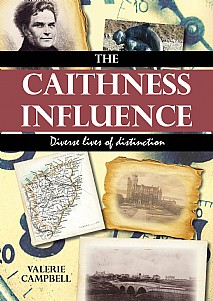 With a small population, it is remarkable that so many people from the county of Caithness have had such a huge impact, not only in Scotland but worldwide. The sheer hard work and determination of people from the county, both past and present, has guaranteed their place in history. From scientists, explorers, ministers and politicians to engineers, artists and writers, this area in the far north of Scotland has a rich tapestry of folk who have made their lasting mark on the world and each chapter deals with their lives, loves and labours.

These include Arthur St Clair, 9th President of the Continental Congress in the United States; Robert Dick, geologist and botanist; Andrew Geddes Bain, road builder and engineer in South Africa; the British Empire’s first-ever Lady Mayor, Elizabeth Oman Yates; James Bremner, famed for his wreck –raising skills and harbour design; Donald Sutherland Swanson, a high profile detective with the Metropolitan Police during the Whitechapel Murders in 1888; Robert Brown, explorer and Alexander Henry Rhind, one of the world’s greatest Egyptologists. The life of Sir John Sinclair, father of the Statistical Accounts for Scotland, is recounted, as is the life of the man best known simply as Ross of Cowcaddens. The modern era is not forgotten with Ian Charles Scott, the New York-based artist and David Graham Scott, a documentary film maker.

All of these Caithness people are among the most notable Scots in the world and this book celebrates their achievements.

This will be of especial interest to many people in Caithness, all those with local connections and anyone interested in history and biographies.

‘…it is remarkable how many people from Caithness have gone on to leave their mark on the world, and in some cases on ours as well. …the fascinating collection of men (and one woman) assembled here fall into two main groups: those who made significant contributions to science, engineering or in others ways in the UK, and those who made their mark in far flung lands.’ Undiscovered Scotland

‘…a cross-section of Caithness “chiels” who have left their indelible mark on the world. … There is a wealth and breadth of talent and absorbing information in this detailed and thoroughly-researched book. That it helps put Caithness and her gifted sons and daughters on the map, so much the better.’ The Scots Magazine

‘…interesting and varied reading. An extraordinary range of talented people stemmed from the area and the accounts cover both those who remained in Scotland and those who made their mark in other areas of the world. … This informative book provides an enjoyable study of a diverse array of subjects and is one for dipping into over and over again.’ Scottish Home & Country