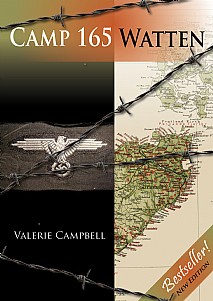 *Open the PDF below
for a free preview

This is a new and expanded second edition of the best-selling first edition. The author has provided an in-depth historical account with new information on a number of prisoners including the eminent Professor Klaus Eggers; Karl Haensel, a former rear gunner who remained in Caithness after his release and Dr. Albert Bisping whose tragic story of a lost love unfolds. There is also the remarkable account of former Cameronian Alan 'Nobby' Noble who was given the vital role of establishing the camp. The impact in Caithness of Hitler's Ayrian policy is also described as well as new stories of lost friendships and lasting legacies.

The camp held a number of SS officers including prominent prisoners such as Gunter d'Alquen, the journalist; Otto Kretschmer, the 'Wolf of the Atlantic'; and Paul Werner Hoppe, former commandant of Stutthof Concentration Camp in Poland. The history of its inception and creation are described, as is the daily life of the prisoners.

Local people give their account of the camp with many having fond memories of the theatre groups and orchestras; one of which played at a local girl's wedding! The camp had a profound effect on Caithness which endures to this day through the friendships built up over its time as Prisoner of War Camp 165. It brings together a plethora of information with links to other camps, not only in the UK. The role of the London District Cage, infamous for its interrogation of prisoners of war, is also explored as is its impact on the camp's history, including the case of the scientist Paul Schröder who worked on the V2 bomb.

This new edition will be of especial interest to many people in Caithness, those with local connections and anyone interested in military history, particularly the Second World War.

Reviews of the first edition
'After 60 years the full story of the camp that held high-ranking Hitler aides is revealed. A new book lifts the lid on the PoW camp at Watten ... where leaders of the Hitler regime were 're-educated' before being sent back home to Germany'. The Scotsman

'...[the] camp had an extraordinary secret role as a place where some of the most notorious figures in Hitler's Third Reich were locked up, interrogated and, where possible, subjected to 'de-Nazification'. Scotland on Sunday

'...remarkable facts unearthed... a well-researched volume that is packed with revealing insights and fascinating snippets of information'. John o'Groat Journal

Safari guide Jeff Williams has brought together a treasure-trove of stories of dramatic events th...