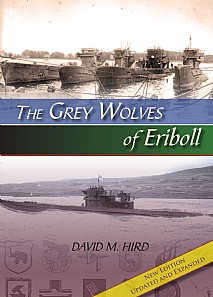 The Grey Wolves of Eriboll

The surrender of the German U-boat fleet at the end of World War II was perhaps the principal event in the war’s endgame which signified to the British people that peace really had arrived.

This revised, updated and expanded new edition gives career details of not only the 33 commanders who accompanied their boats to Loch Eriboll but also of a further 23 previous commanders of those U-boats, including four who might be considered ‘Aces’ because of the damage they inflicted, sinking and disabling Allied shipping. The book also features an analysis of the Allied naval operation under which the surrendering U-boats were assembled in Scotland and Northern Ireland; asks who first contacted those U-boats after the capitulation – armed British trawlers, frigates of the Allied navies or aircraft of the Royal Air Force; and discloses how U-boats spared destruction were distributed to the navies of the USA, France, USSR and the Royal Navy. Also revealed are more unpublished recollections of British and German naval personnel present at the Loch Eriboll surrenders and how 116 surviving U-boats came to be sunk in the waters of the Western Approaches in the winter of 1945/46.

The Grey Wolves of Eriboll includes a wealth of historical insights including the German Surrender Document; detailed descriptions of the construction, service careers and circumstances of each surrendered U-boat; details of the frigates that supervised the surrenders, contemporary newspaper reports and descriptions of the naval Operations Pledge, Commonwealth, Cabal, Thankful and Deadlight, each of which involved Eriboll U-boats. The mysteries surrounding Hitler’s yacht and the alleged ‘Norwegian Royal Yacht’ (which did not exist at the time) are also explored.

The pivotal role played by Loch Eriboll in ending the U-boat menace is little-known and lesser celebrated – this book rights that wrong.

This long-overdue book will be of huge interest to all those interested in WWII and modern history, particularly in Scotland. It will also appeal to U-boat and submarine enthusiasts, mariners and ex-mariners and anyone with local connections.

‘...a wealth of historical insights and personal memories of those who witnessed the events...a remarkably interesting read. A definitive account of a secret mass surrended of interest to all students of naval history’. Julian Stockwin

‘...Mr Hird has told the story of the secret mass surrender with new insights, including many personal memories of those who witnessed the events as well as the career histories of the U-Boat commanders’. The Northern Times

‘David Hird’s success is bringing these stories together and adding to them with extracts from official documents and newspaper reports... The result is a fascinating account of a little known operation and a treasure trove of vignettes that are as attractive for the general reader as they are for the specialist. ...this book deserves to be on staff officers’ reading lists as much as it does on that of anyone interested in naval history’. Headmark, The Australian Naval Institute

‘Truly definitive books are very rare, but “The Grey Wolves of Eriboll” by David M. Hird is certainly one of them. This book is essential reading for anyone interested in the naval history of World War Two, or in the history of northern Scotland. ...David M. Hird has done a simply magnificent job in covering the surrender of the U-boats from every conceivable angle. Perhaps most fascinatingly of all, he looks at some of the myths and legends that have built up around the surrender of the U-boats, and convincingly separates fact from the British propaganda that sometimes muddied the waters’. Undiscovered Scotland

Reviews for the 1st edition...

‘This is a book for the U-boat war aficionado. There are inclusions throughout of unusual detail, such as the actual messages exchanged between Dönitz and his vanquished boats… …The Grey Wolves of Eriboll offers an interesting view of a brief moment at the end of a long struggle…’ The Northern Mariner/Le marin du nord

‘…a specialist book for enthusiasts who wish to follow the story of the German submarine fleet to its end in May 1945. In particular, it gives the details of the 33 U-boats that surrendered at Loch Eriboll…’ The Nautical Magazine

‘… Containing a wealth of information, the author has clearly meticulously researched his work. Historical insights are littered throughout and include the German Surrender Document; detailed descriptions of the construction, service careers and circumstances of each surrendered U-boat… A fascinating read.’ Sea Breezes

‘…covers the surrender of some 160 German U-boats on active patrol in the North Atlantic in May 1945. …lists and details of each U-boat there are however, diary extracts which underline the extreme bravery and privation endured by the U-boat crews.’ The Little Ship

'The author has assembled a fascinating amount of 'personal recollections' from both German and Allied people, he looks at the naval escorts involved - 21st Escort Group and the 9th Canadian Escort Group and details every U-boat that visited Loch Eriboll. Most fascinating is the author's selection of 'contemporary information' in the form of extracts from how 'The Scotsman' newspaper saw it. An excellent book covering a significant naval event in the immediate days following the ending of combat against Nazi Germany.' Warships

'...well researched book... ...this fascinating book describes how the surrender of the U boat fleet was put in place...' Ships Monthly

'...well researched, fact filled and eminently readable account of this mass surrender... David Hird's excellent book highlights a little known period at the end of the war when the "Grey Wolves" were temporary visitors. It comes highly recommended.' The Northern Times

'...a highly readable narrative. ... Hird is proving to be an excellent chronicler of modern history of Sutherland and this book is a welcome addition to the literature of the area.' Am Bratach