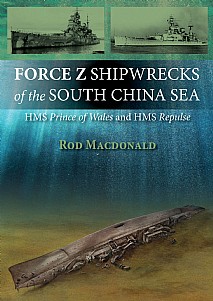 The tragedy of the loss in 1941 of two Royal Navy capital ships, HMS Prince of Wales and HMS Repulse, the core of Churchill’s deterrent Force Z, stunned the world. Churchill had hoped that sending a small powerful squadron of ships to Singapore would deter a threatened Japanese invasion of Malaya and Thailand. He was to be proved tragically wrong. Denuded of aircraft cover, Force Z was left disastrously exposed to air attack. Within eight days of their arrival at Singapore both ships were sunk with huge loss of life in a mass attack by 85 Japanese bombers. It was the Royal Navy’s greatest loss in a single engagement and the first time a modern battleship had been sunk by air power. With the naval force at the bottom of the sea, and the RAF almost wiped out in Malaya on day one, Singapore was left with no air or sea protection and fell two months later.

This is the first book to explore in detail the wrecks of these two vessels and grippingly narrates a summary of the Japanese threat, Fortress Singapore and the subsequent Japanese invasion. Today the wrecks of these two famous British warships lie on the bottom of the South China Sea, 200 miles north of Singapore and 50 miles offshore. The author was invited as a civilian expert on a military expedition to dive and survey these wrecks and now, for the first time, the wrecks are revealed as they are today. Beautifully illustrated with specially commissioned artist’s illustrations of the wrecks, each one is looked at in detail. The story of the loss of these two ships, and of the sacrifice of the men who served in them, is remembered.

This has been a personal quest for the author whose grandfather was serving in Singapore when Force Z arrived. His wife and the author’s father and two brothers were among the last civilians evacuated from Singapore before the final siege. His grandfather was taken into internment at Changi Gaol by the Japanese and suffered there for three years until Singapore was reoccupied by the British in 1945. Had the Fall of Singapore not happened the way it did the author would not be here to write this truly remarkable book.

This will be of enormous appeal to divers, anyone interested in history, the sea, maritime and military history as well as those with an interest in shipwrecks.

'Macdonald's descriptions of the sinking of the Prince of Wales and Repulse are well written... The photographs are highly emotive: The human drama is brought sharply into focus, and the illustrations of the wrecks are interesting, insightful, and haunting. ...the book does provide a new angle on the fate of Force Z, and Macdonald's enthusiasm for his subject is evident'. Naval History

'...the textual wreck descriptions and colour photographs of the sites at the end of the work are quite fascinating. They are well shot, with enough light and detail to ponder over what exactly caused such damage, and various ancillary effects. ... The rest of the book is well illustrated, and there is a good bibliography. Recommended'. Journal of the Australian Naval Institute

'It is a well researched, well written, well illustrated and very interesting. The author participated in a diving expedition on the wrecks of these great British warships in the South China Sea. That experience, combined with a family connection, inspired this excellent book. A good and brief description of one of Britain's worst ever naval disasters, the build-up and its aftermath'. Work Boat World

'...gives excellent background on the ships, their role, the build up to the Japanese attacks on the Force Z ships, and the subsequent fall of Singapore. ...a first class book. ... His explanations of the Japanese military build up and campaigns in the Malay Peninsula are both succinct and informative, and to me they are one of the highlights of the book. ...a thoroughly enjoyable book and for anyone who wishes a short but well written account of the fall of Singapore, I can thoroughly recommend this "dive book"!' Warship World

'...the story of Force Z, particularly HMS Prince of Wales and HMS Repulse a significant aspect of World War II history. ... Undoubtedly, the detailed work and research that the author dedicated to this publication is reflected in the depth of information provided... ...these chapters are intriguing and easily readable, engaging the reader throughout. As a result this publication would be of particular use to maritime historians, divers and students alike, simply in terms of the detail and wealth of information Macdonald has included about the wrecks and their wartime context'. The Great Circle

'... I found these chapters fascinating as Rod unfolds events: ship deployments, the Royal Australian Air Force involvement, followed by the Japanese invasion of northern Malaya, outflanking our troops as they raced down the peninsula. ...he can be congratulated on writing a short, readable and interesting account of the Singapore disaster. You don't need to be a 'wreck diver' to appreciate this well written book'. The Royal Naval Sailing Association Journal

'History! The world of ultimate fascination, and what's better than the accounts of two mighty dreadnoughts! ... The specifics of each battleship are described in detail, along with some terrific black and white photographs'. Tech Diving Mag

'…it does provide a detailed account of the fall of Singapore, and offers clear insight into perhaps the first great shock of World War 2: the loss of a brand new, state of the art battleship with heavy casualties. …Rod has made good use of photography in the diving pages of the book, as ever. … As a seasoned wreck explorer, Rod Macdonald understands the history of a sinking better than most, yet you sense the Force Z shipwrecks represent something more. Because of his grandfather in Singapore, there is an affinity that underpins his account of diving to the site. It is a fascinating and respectful tale…'. British Diver

'...submariners and especially divers will appreciate this book. ... The build-up to, and the invasion of Malaya via Thailand and the battle for Singapore are described in some detail'. In Depth

'...is laced with glorious black & white photographs. ... it's a fascinating tale well told, and again there are contemporary photographs and explanatory maps. ... it's the text that captures the spirit of the moment. ... I thoroughly recommend reading this book... ...it makes for a fascinating read'. Divernet To read the full review click here

'...this is a beautifully compiled book accompanied with stunning photgraphs of how the wrecks look today. A fitting tribute to the loss of these two fine ships and the sacrifice of the men who served in them'. Sea Breezes

'...another outstanding work by established author and diver Rod Macdonald, we are provided with the most complete history of the ships, men, political intrigue and events which led to the loss of these two famous ships so overwhelmingly. The surrender of Singapore and an account of Lt. General Percival's actions are also included. ...should be studied by anyone and everyone who is considering a visit to the two wrecks in question. ...the excellence of this work - which I truly regard as a tour de force and from which I have learned much... ...I do believe this book contains all you ever wanted to know about these two ships and their fate!' Ned Middleton