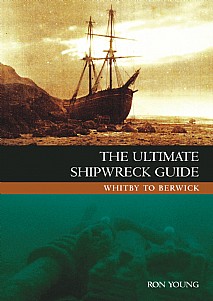 The author has acquired a vast wealth of knowledge, data and experience in boat angling, sport and wreck diving over a period of almost 50 years and has written various wreck books, including two volumes about shipwrecks off the north-east coast of England. However, this book is far superior. No other single publication has so much information about the shipwrecks and crews that were lost over this huge region of the North Sea from Whitby to Berwick and up to 40 miles offshore. There are 285 wrecks in total, including 22 located in an area known ominously as the 'Graveyard', about 30 miles off the River Tyne, that has never previously been written about, plus dozens of almost certainly virgin wrecks that are just waiting to be explored!

The book is absolutely jam-packed with valuable information and technical data including the ship's builders, past owners, dates and name changes and in many cases the captains' names. Precise WGS84 GPS positions are supplied for each wreck and these have been meticulously checked over several years to ensure they are correct and as accurate as humanly possible. Many of the wrecks are in depths of between 80 and 100 metres - well beyond the range of normal sport divers - but with new technological advances in equipment they offer exhilarating future projects. However, for the boat angler they will be paradise found!

Where possible, the ship's previous service history has been supplied, followed by a detailed account of its final voyage/patrol and its demise. Some of the Board of Trade Wreck Reports, survivor and witness statements tell of harrowing and terrifying anecdotes. This is Ron Young's best book to date.

Sure to be of immense appeal to all divers including those from European countries such as the Netherlands, Germany, France and Scandinavia; sea anglers plus anyone with a fascination for the sea, shipwrecks and maritime history.

'Is this the Ultimate book on shipwrecks? After reading it I would unashamedly say yes! It is an extended, unique and comprehensive guide to 285 shipwrecks off the North-East coast of England. ... It is bigger and better and definitely more interesting. An excellent book superbly written and researched, and contains the history of each ship. A superb reference book for the diver, the deep sea wreck fisherman, the historian and, most important of all, the casual reader. ... I can only say now an absolute bargain, and congratulations to the author for a superb book. Recommended.' The Nautical Magazine

'He has amassed huge detail on wrecks from 1850 to the present day, whether sunk by mines, U-boats or accidents, and nobody knows more about the wrecks in that area than the veteran diver.' The Sunday Post

'...the details contained in this book are as accurate and as complete as it is humanly possible to achive. Unlike any other book I have read, where there was a loss of life - he also lists the names of those who died. Now that is thorough! In summary, I regard this work as a triumph of meticulous research and would suggest it is probably the 'only' reference material any wreck diver frequenting the north east of England will ever need and is, therefore, thoroughly recommended.' Sport Diver, Ned Middleton

'While the book is primarily aimed at amateur wreck divers, the potted history of each ship is well done and each is fascinating in its own right. Another excellent source book for maritime historians.' Work Boat World

'An excellent well composed book which compiles Ron Young's two previous volumes. A wealth of information is included on all 258 shipwrecks along the north-east coast from Whitby to Berwick including the date loss, the depth, precise GPS positions and a five star rating devised by the author. Meticulously researched, this fascinating volume is recommended to divers, researchers and historians. ... Highly recommended' Sea Breezes