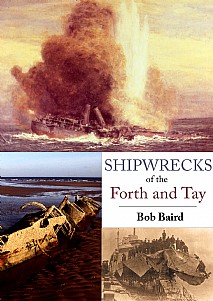 Shipwrecks of the Forth and Tay

This is a meticulously-researched reference guide to 300 shipping losses, and the events surrounding their sinking, off the coast of Scotland from Berwick-on-Tweed to the Forth and Tay, and northwards to Stonehaven.

This new book is a very much improved and updated edition of the successful previous edition, Shipwrecks of the Forth, and benefits hugely from the vast amount of vital new information gleaned by the author during 15 years of painstaking research. Each wreck is listed by area with details of position, history and fate. The text is accompanied by maps and charts and illustrated with many dramatic photographs. As a result of this meticulous work, exciting discoveries and recoveries such as ships' bells and pottery have been made by divers, allowing them to confirm identities of previously unknown wrecks.

In addition to first-hand local knowledge of fishermen, coastguards, lifeboat men and divers, the author has consulted primary sources including official records from the Admiralty and Lloyds, official German U-boat records and Norwegian, Swedish and Danish records.

Many vessels were lost due to running aground or collisions but the vast majority of shipwrecks immediately surrounding our coasts resulted from military activities during the First and Second World War. As such this aspect of the book provides significant historical interest for readers.

Shipwrecks of the Forth and Tay will be indispensable to divers wishing to explore these wrecks; it will also attract anyone who loves the sea and ships, who has an interest in this area of Scotland, maritime history or anyone looking for an informative read.

'Each of the listed wrecks is accompanied by details of the sinking, the position (where known), history and fate of the crew, along with supporting maps and charts. ...a valuable book contributing to the maritime history of the area. Highly recommended'. Sea Breezes

'...is a triumph of research and dedication as it reveals the facts about the loss of some 300 ships and other craft within a given geographical area of the UK and, as such, will prove to be an invaluable asset to all scuba divers and others who seek to learn more about these vessels and their history. ... For those with a passion for the shipwrecks within the geographical area covered by this work, I doubt a better book will ever be published and I congratulate the author on his attention to detail and painstaking research'. Sport Diver Magazine

'The author has compiled an amazing collection of photographs, some are sinking , some aground, of the ships listed. Typically meticulously, the author has incorporated a detailed index of the exact position of all the wrecks mentioned'. Ships and Shipping

'This is a fantastic book for anyone interested in maritime affairs and particularly shipwrecks. It is written in an engaging personal style and with such a wide range of stories and facts that it will appeal even to those who have no intention of searching for wrecks to dive on in the east of Scotland'. The Northern Mariner/Le marin du nord

'...will appeal to submarine buffs and all wreck divers... ...contains masses of new information. It deals with more than 300 wrecks sunk off the coast off Scotland... Full of detail about the sinking, positions and what divers will see today, it is particularly strong on submarines'. DIVER Magazine