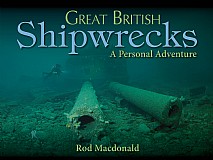 For more than 30 years, internationally acclaimed wreck diver and best-selling author, Rod Macdonald, has surveyed and researched shipwrecks around the world. His books such as Dive Scapa Flow and The Darkness Below are household names in the diving world.

In Great British Shipwrecks Rod uses his encyclopaedic knowledge and an intimate understanding of shipwrecks, gleaned from a lifetime’s diving, to provide a snapshot in time of some of the best known and most revered shipwrecks around the UK.  For each of the 37 shipwrecks covered Rod provides a dramatic account of its time afloat and its eventual sinking – with each wreck being beautifully illustrated by renowned marine artist Rob Ward.

Rod’s journey around the UK starts with the classic recreational diving shipwrecks at Scapa Flow in the Orkney Islands  from giants such as the German WWI battleships, Markgraf, König and Kronprinz Wilhelm, to the legendary WWI British cruiser HMS Hampshire on which Lord Kitchener perished on a voyage to Russia in 1916. Rod then travels to the English Channel where he covers such famous ships as the P&O liners Moldavia and Salsette which were lost during WWI with many others such as the SS Kyarra and the British submarine HMS/M M2 – the first submarine to carry a seaplane for reconnaissance.

The reader is then taken to the North Channel of the Irish Sea where the famous technical diving wrecks of the White Star liner Justicia, HMS Audacious, the first British battleship lost during WWI, and the SS Empire Heritage, which was lost with its deck cargo of Sherman tanks on a voyage from New York during WWII, are beautifully illustrated. Returning to Scotland, the famous West Coast shipwrecks such as the Thesis, Hispania, Rondo and Shuna in the Sound of Mull grace the pages, in addition to the renowned wrecks of the SS Breda, lost near Oban, and the WWII minelayer HMS Port Napier off Skye. Lastly, Rod covers some major North Sea shipwrecks, revealing for the first time the haunting remains of HMS Pathfinder, the first Royal Navy warship to be sunk by U-boat torpedo during WWI.

This is a beautifully illustrated and definitive guide to the greatest shipwrecks around the UK and will be an enlightening and unmissable book for many.

This book is an essential ‘must have’ for divers and anyone interested in what lies beneath Britain’s seas. UK divers will find many wrecks they have personally dived plus many others still on their ‘to do’ list. A visually stunning book for all those interested in maritime/military history and non-divers who will marvel at sights hidden from view in the dark depths of Britain’s waters.

'...each of the wrecks discussed is dramatically described... ...extensive research on each wrecks has facilitated some very concise and accurate vignettes describing the vessels concerned and the circumstances of their being wrecked'. Work Boat World

'...an informative 'coffee table' book it is presented in five large chapters divided into the geographical areas of Britian... ...this is a well-presented book that successfully culminates 30 years of diving and comprehensive research. This will be a valuable source and succeeds in Macdonald's aim to interest both the diving and non-diving enthusiasts in maritime history'. The Great Circle

'Shipwreck enthusiasts as well as the casual observer of maritime history will appreciate the laborious process that resulted in Ron Macdonald's Great Shipwrecks: A Personal Adventure. ...the drawings of ships in their current positions provided the greatest addition to the writing. ...encompasses both popular dive sites that an avid shipwreck diver might experience as well as more obscure locations that hold intriguing stories about the ships' demise. ... This book is directed to readers who are either shipwreck diving enthusiasts or have a casual interest in the subject area. ...his images, organization of information and first-hand experience will appeal to a popular audience. ...the author has created a new resource in the field of shipwreck diving'. The Northern Mariner/Le marin du nord

'Plenty of detailed historical background accompanies each vessel, and Macdonald's immensely thorough research offers up some fascinating insights on both lives, and deaths, of these mighty vesels. ... This book will surely appeal not only to the divers and salvors amongst you, and to those interested in maritime and military history, but also to anyone simply curious about the hidden mysteries of our oceans'. International Tug & OSV

'...is very much a recommended book for your collection if you are a keen wreck diver of our British waters. ...he brings together a wealth of knowledge and research when writing about the history behind each wreck, its demise and how it lies in the water today. The detail that Rod goes into will definitely ensure that the reader gets the most out of their dive should they plunge into any chosen wrecks from this book. ...there are a number of historical and more recent photographs, maps and key wreck information to ensure that this book is a excellent guide for divers and those simply interested in our maritime history'. Tanked Up

'This visually stunning and definitive guide to the greatest shipwrecks around the UK will appeal to divers and anyone interested in what lies beneath Britain's seas. The graphics alone make it a well worth purchase. I would recommend this book to anyone with a serious interest in these wrecks'. Shipping Today and Yesterday

'...the sheer number of wrecks to be found makes the country unmissable for many divers, and this book is a showcase of some of the best. ... The book opens with a chapter on the Scapa Flow... ...and provides a great story of how the fleet came to be sunk and the salvage operation that followed. ... Diving freezing waters of the British coastline may not be a pastime that appeals to everyone, but buy this book and you have enough facts to convince anyone you were tough enough to do it!' Nautilus Telegraph

'...this is a revealing and absorbing read. Written by hugely experienced diver Rod Macdonald, the book highlights almost 40 of the best known wrecks around the UK - including the remains of the German High Seas Fleet scuttled at Scape Flow. ... The level of detail is such that it's not suprising that the book is a result of several decades' worth of dives. ... Fascinating stuff - with an appeal for divers and non-divers alike'. Scotland Outdoors To see the full review click here

'...wonderful colour paintings by illustrator Rob Ward which help non-divers to visualise the scene. ... Lovers of the sea and ships will find a great interest in this book, which covers wrecks in the South West and English Channel, as well as dive sites off Scotland and Northern Ireland'. Cornish Times

'I am really taken by this book. The underwater photographs are amazingly clear...This is another great coffee table book and a definitive guide to the greatest shipwrecks around the UK'. Fiona Outdoors

'...a fascinating read for non-divers. What makes Macdonald's work even better are the illustrations of the wrecks...' Fairplay

'A fascinating book, full of maps, drawings and photographs, which will enthral even non-divers'. Cornwall Life

'...Great British Shipwrecks' is a fascinating new guide to the greatest shipwrecks around our coasts... It's a "must have" for anyone with an interest in what lies beneath our seas'. Derry Journal

'...not only is this author yet to disappoint me, he continues to confound me with the depth of information he always seems to uncover. ... Part 1 covers Orkney and Scapa Flow where we find a new, wholly original and well-researched account of the events which led up to the scuttling of the German High Seas Fleet in 1919. ...the history and attention to detail regarding the background information of each ship is exceptional. ...admirable artwork of a calibre rarely seen. ...I commend the author on a job well done on a work which more than deserves full marks'. Ned Middleton

'Rod's books have always contained the fantastic pictures of wrecks that have been used over the years as part of any Scapa Flow or Sound of Mull dive briefing... ...is another "must have"... It has history, anecdotes, information and wreck drawings, linked together in an informative and always entertaining manner. It is a book for divers and non divers, written by one of diving's true characters - it brings the wrecks alive and gives us another diving Bible to use when introducing the next generation of divers to the fantastic wrecks of the best diving destination in the world'. Gordon Mackie

'There's something irresistible about a wreck to boat owners. ...is bound to be a must have for all that spare cash slopping around in yachtsmen's pockets after Christmas. ...a superb work by internationally reowned wrecks diver Rod Macdonald...While his words bring detail to the stories it's the book's rich colour illustrations that add great interest to the wreck sites... This is a book for the yachtsmen's library, fascinating and beautiful at the same time'. Yachting Life

'An illustrated tour of the UK's best-known wreck sites... ...feature in a new book highlighting almost 40 of the most famous wrecks around the UK coastline. ... This is a beautifully illustrated and definitive guide... ...and will be an enlightening and unmissable book for many people interested not only in the shipwrecks themselves, but also maritime history in general'. The Orcadian

'... I very much like the look of the book, the design and layout are modern and easy on the eye. ...what makes this more than just another wreck book is the painstaking and thorough research Rod provides. He goes to extraordinary lengths to uncover details about the ships from their builders, owners, crew and the circumstances of their sinking. ... This book is both good to look at and a good read, I thoroughly enjoyed it'. Scottish Diver

'Great British Shipwrecks, the latest publication from internationally acclaimed wreck driver Rod Macdonald is one more fascinating, easy-going read that comes with sketches and well-shot pictures. ...covers battleships, submarines, ocean liners, along with different equipment, machinery and cargo including Bayern 15-inch gun turrets and Sherman tanks. ... One of the most attention-grabbers of Great British Shipwrecks is the quality of illustrations; really good job done by marine artist Rob Ward. This comes hand in hand with its landscape A4 format, which allows better display for bigger pictures and illustrations. Good choice!' Tech Diving Mag

'...a beautifully produced landscape format book... the real magic of a book that makes fascinating reading even for the non-divers among us. ...give a very clear impression of what some of the finest shipwrecks around our coasts actually look like... ...The third factor that makes this book so special is the author's very evident interest in and sympathy for the ships he includes and the people who sailed in them...' Undiscovered Scotland click here to see the full review

'...pulls together thirty-seven of the UK's finest diveable wrecks into one tome, complete with their history, illustrations and photographs. ...is a gripping coffee table read in its own right... His accounts of diving the Justicia, HMS Audacious and Empire Heritage off Ireland's north east coast can't fail to deliver schoolboy-like excitement. ...the book is excellent'. British Diver