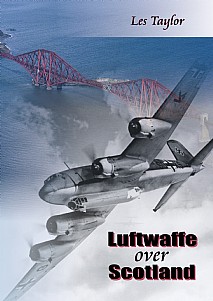 Luftwaffe over Scotland is the first complete history of the air attacks mounted against Scotland by Nazi Germany during World War Two and undertakes a detailed examination of the strategy, tactics and politics involved on both sides, together with a technical critique of the weaponry employed by both attackers and defenders. Extensive figures on Scottish civilian casualties have been included, together with a full list of all Scottish locations that were bombed and details of German aircraft losses.

From the relentless hit-and-run attacks up the east coast of Scotland to the calamities of Clydebank and Greenock, Luftwaffe over Scotland not only offers a detailed analysis of exactly what happened, but also provides fresh new evidence and claims regarding many aspects of the war in Scotland - some of them specifically at odds with the more traditional British portrayals of World War Two. Some of the controversial issues raised include


■Why was there no 'Phoney War' in Scotland?
■Did the Battle of Britain begin over Orkney in April, 1940?
■Why were more people killed in Glasgow than at the target of Clydebank?
■Why were the Greenock raids such a disastrous failure for the Luftwaffe?
■Why did Hitler personally ensure Aberdeen became Scotland's last raided city?
■Why was the last air battle in Europe fought off the Aberdeenshire coast?
Luftwaffe over Scotland draws on a wide variety of sources, such as official archives, articles, letters and personal testimonies, including information about German Luftwaffe operations, to paint the first full and accurate picture of the dramatic and often brutal air attacks that took place in almost every village, town and city in Scotland during World War Two.

From a detailed analysis of the attacking German forces, to an explanation of the strengths and weaknesses of the air defences around Scotland, this is an important and long-overdue contribution to the full understanding of this dramatic period in the history of the modern Scottish nation.

Sure to be of widespread appeal, not only to everyone with an interest in modern and military history but also to the casual reader.

'...is a long-overdue publication that goes a long way to help our understanding of the German bombing campaign over Scotland during World War Two and answers some important questions. ... The book includes some previously unpublished photographs, plenty of clear, detailed full page maps, Bibliography, good index, and 144 pages. Without a doubt to be kept handy on your bookshelf. Highly recommended.' Wargames Illustrated

'...an excellent book which sets out an engaging, measured and carefully researched account of the air war over Scotland during World War II. ...Les Taylor is to be congratulated in setting the record straight in his chronological treatment of his subject. ...succeeds in throwing new and unexpected light on the subject.' Undiscovered Scotland Click here to see the full review

'...descriptions of attacks and targets make fascinating reading with easy-to-follow lists of the Luftwaffe's key Scottish targets... ...shows a depth of knowledge that's as impressive as some of Britain's best-known military warfare writers. ...easy to understand and breaks up the subject into sections and with superb images that deliver a concise and detailed account of a very important, and largely ignored, part of the German war on Britain.' The Knocknews and Regional Adertiser

'It is truly a must-read.' Irvine Herald