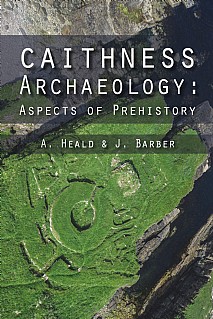 Caithness, the most northerly county in mainland Britain, is one of the richest cultural landscapes in Europe. The relative geographical isolation of the area, traditional landholding and the survival of large estates, combined with the use of flagstone as the main building material since earliest times, has ensured the survival of a wide range of monuments in a profusion unequalled elsewhere in Scotland.

In the 19th century, Caithness was at the forefront of archaeological endeavours with many sites central to our understanding of Scottish prehistory. Since then, despite intermittent activity, the archaeology of Caithness has become somewhat marginalised and there is a perception that there are only a handful of archaeological sites for visitors to enjoy and the archaeologist to uncover and interpret. However, the county is full of hidden riches and traces of the past are visible everywhere. Caithness is dominated by landscapes rich in archaeological remains of all periods; chambered cairns, stone settings, brochs, Pictish settlements, wags, castles, harbours and post-medieval settlement, amongst many others.  The authors have presented a cross section of these monument types in an attempt to re-centre the county in archaeological and early historical narratives.

For the last decade, the authors have been involved in a range of heritage projects in the county, thus allowing them time to discover, observe and consider its archaeology. Their peregrinations provided opportunities for deeper contemplation of the county’s archaeology, the result of which is presented in some new interpretations and perspectives which convey the excitement of working on heritage in Caithness.

This will be of great interest to all archaeologists, from enthusiasts to students and professionals. It will also appeal to visitors who are interested in the archaeological heritage and history of the county.

‘...a pioneering one for the archaeology of Caithness... What is refreshing in this work is that the more recent discoveries and work by the people who actually live in the area...are celebrated. ...this entertaining and informative volume’. Society of Antiquaries of Scotland

‘…this enjoyable new book. … An engaging introduction to a fascinating region’. Current Archaeology

‘…it is indeed a marvellous record. … Amply illustrated, the authors have imbued the text with a personal touch that lifts the title well above being a dry, scholarly tome into an immensely readable, detailed and, above all, enjoyable account of the sites found in mainland Scotland’s most northerly county’. The Orcadian

‘…a readable account and a study of the places and the people of this fascinating part of Scotland’. The Scots Magazine

'...it is filled with well-informed lively comment and interpretation, a good deal of which is new. ...an inportant book which campaigns on behalf of the richness and importance of the archaeological sites and landscapes of Caithness... ...marks the new beginning made for the archaeology of Caithness in recent years...' Am Bratach click here to read the full review

‘…an engaging, readable and well-produced volume that highlights the heritage of an unfairly neglected region’. British Archaeology

‘The reader is taken on a journey through time and is provided with a discussion of the rich heritage of monuments and archaeological landscapes. ..a cleverly woven mix of historical investigation, description and explanation. …a well-produced authoritative text on Caithness prehistory, that is well illustrated and provides an important insight…I would strongly recommend it not only to the visitor but also to the resident. For those interested in the prehistory of Caithness, this book is for you.’ SAS Bulletin

‘…gives Caithness archaeology a deserved spotlight. …provides an in-depth discussion of prehistory and archaeological research in this isolated part of Britain… This in-depth understanding…makes the book particularly valuable… This excellent discussion of Caithness’ archaeology is supported with a wealth of illustrations… …the book is a splendid presentation and discussion of well-selected aspects of the prehistoric and early historic archaeology of Caithness…highly recommended to anyone interested not only in Caithness, but Scottish prehistory in general… Hopefully this publication will raise awareness about the richness and significance heritage of Caithness…’ The Megalithic Portal Read the full review here

‘…this beautifully produced and fascinating book… …their book is an excellent starting point for anyone wanting to find out more. Anyone living in the area, and especially anyone travelling north…should read this book. You will be intrigued and inspired, and more than a little wiser’. Undiscovered Scotland

‘…provides a rich and entertaining discussion of the country’s prehistory: a topic which was in much need of examination. This text will undoubtedly help raise the profile of one of Scotland’s richest archaeological landscapes and encourage others, like the authors and those before them, to continue to improve our understanding and to celebrate Caithness archaeology’. Conservation and Management of Archaeological Sites

‘…the book’s richest sessions draw on the authors’ work (including experimental) on the architecture of Neolithic chambered cairns and their re-excavations at a notable cluster of Iron Age brochs around Keiss. … an engaging presentation’. Medieval Archaeology