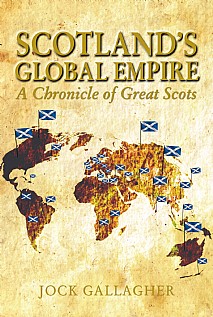 A Chronicle of Great Scots

Scotland's Global Empire is one journalist's tribute to some of the lesser-known great Scots and their contribution to the world.  Jock Gallagher was encouraged in his epic enterprise by a quote from Voltaire: We look to Scotland for all our ideas of civilisation.

‘Voltaire may have over-egged the pudding but in many areas, I believe, our small nation has punched well above its weight and has earned this generous compliment,’ says Gallagher. Is that a fine conceit, an extravagant claim or perhaps a journalist talking in headlines? You will have to read the book to find out!

Written over five years, this engrossing and enlightening book stretches to over a quarter of a million words and is a fast, pacy read as it races through the exploits and achievements of an astonishing gallery of the Scots who make up his Scottish Empire.
Gallagher is quick to disassociate himself from other empire models. ‘It's not an empire of colonisation that diminishes or enslaves those whom it embraces. It involves neither the greed nor ruthlessness so often inherent in empire-building. It's an empire that breaks down barriers rather than creates ownership and, it can be claimed, enhances civilisation.’

Although household names such as Andrew Carnegie, Alexander Graham Bell, John Logie Baird and Charles Rennie Mackintosh are mentioned to underpin the strength and breadth of the Empire, only abbreviated reminders of their well-known achievements are shown.  It's not a recital of the adventures of conquering heroes, although some are included. It's more an outreach of ideas, the story of human endeavour in its many forms … pushing at the boundaries of the imagination and stretching the accepted order. It encompasses everything from the spirit of pioneering to the mystical qualities of leadership.

‘It's luckily not dependent on a seat of power and nor is it affected by the bruising arguments about Scotland's place within the UK or as an independent state.’
Gallagher brings together an astonishing array of characters who may not have made headlines but are essential elements in his illusory empire with a heady mix of extraordinary vision, creativity, energy, leadership, diplomacy, skill, artistry, sometimes pure genius and, more often, downright doggedness.

An unmissable read, particularly for all Scots, whether at home or part of the wider Scottish diaspora, as well as anyone with an interest in Scotland and its history. The diverse and perhaps unexpected contributions featured will amaze as well as entertain all readers.

'...a fast, pacey read presenting an array of characters who showed drive and doggedness, devotion and duty and who made a difference to the lives of millions, worldwide'. Scottish Island Explorer

'...Gallagher brings together a heady mix of vision, creativity, energy, skill and, more often than not, sheer doggedness. It's an absorbing read with more than one revelation, including heroes from the American Civil War, sporting and showbiz superstars and prolific writers whose prose would inspire, amuse and enlighten'. The Scots Magazine

'...Jock Gallagher truly shows us the power and influence of Scotland's global empire. A sturdy, informative, meaty volume for your bookshelves; and eye-catching not least for its excellent typeface, paper quality, and (for the true Scot) inspiring cover; a map of the world bristling with Scottish flags!' Journal of the Chartered Institute of Journalists

'Scotland has generally pulled above its weight in the Palace of Westminster and Jock credits it with 10 out of 53 prime ministers... ...a chunky book in praise of Scots. ... There are international perspectives, sport, entertainment.' Liberator

'...Jock Gallagher...has now compiled the list of stories highlighting the efforts of his fellow countrymen over the years in his new book...' Dumbarton & Vale of Leven Reporter

'... sets out to describe the achievements of over 1,000... Jock Gallagher...writes in a racy style while packing the 450 pages full of memorable facts and figures.' Rampant Scotland Newsletter

This will be available soon to download from your favourite etailer