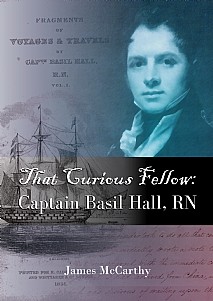 Son of a scientifically-minded Scottish aristocrat, Basil Hall joined the Royal Navy at the age of 13 in 1802. His first naval engagements in America and Spain during the Peninsular War are described, as are his travels in India and the Far East. His renowned interview with Napoleon, while still a prisoner on St. Helena is featured. He was a confidante of Sir Walter Scott, Dickens and many other distinguished authors of his day.

Renowned for his curiosity and energy, he became a popular writer himself based on his world-wide travels and adventures, including his involvement in the liberation of Peru and friendship with General San Martin. He embarked on an epic, 10,000-mile journey with his family in North America and twice journeyed across the sub-continent of India under the patronage of the Admiral Sir Samuel Hood, providing delightful vignettes of Indian life of the time. Subsequent travels in Europe introduce personalities such as Lord Byron and the eccentric Countess Purgstall.

Although the narrative of his journey in the United States earned him great opprobrium from Americans for his conservative attitudes, his support in Edinburgh to the great American bird painter, John James Audubon, was greatly appreciated by the artist.

As an amateur scientist, Hall made important contributions to nautical astronomy, geology and naval technology, being a Fellow of both the Royal Society and the Royal Society of Edinburgh. Among his scientific friends were Sir John Herschel, Mary Somerville, and Sir Humphrey Davy, among many others.

He was in the unusually privileged position of moving among the upper echelons of British society’s distinguished writers, scientists and politicians thus providing a fascinating insight into the mores and manners of high society in Edinburgh and London. The inclusion of previously unpublished and often revealing correspondence has contributed to the first full biography of a very colourful individual and his times.

This fascinating book will be of immense appeal to everyone with an interest in naval history, exploration, travel, scientific discoveries and historical biographies.

'This is a well-researched and written account of the life and times of a noted naval adventurer and dabbler in the sciences and arts. ...James McCarthy has skilfully woven together the story of this remarkable man - a story which serves to demonstrate the dynamic role of Scots in the rapidly expanding British Empire of the post-Napoleonic era. McCarthy deftly reconstructs the Edinburgh society in which Hall moved with such ease and purpose. Indeed, Sir Walter Scott was prompted to describe Hall as 'that curious fellow who takes charge of everyone's business without neglecting his own'. Well illustrated and attractively presented, this book readily earns its place on the shelves of the library of the modern-day student of Scottish travellers and explorers'. Review of Scottish Culture

'...its good to see a biography of such a strange and unusual character.' Bookgeeks

'With such a hero and such adventures, this should be a fascinating book. And indeed it is. ...a vivid picture of the daily life and times of seafarers and their families at a time of tremendous development in our maritime history.' Little Ship Club

'Confidant of Sir Walter Scott and Charles Dickens, this largely forgotten naval hero and explorer provides a fascinating insight into a long ago world of adventures.' Scottish Memories

‘The story James McCarthy tells so well is of a lost worldwhere the curious, privileged amateur was not yet overshadowed by professionalization. …McCarthy makes a rollicking good story of it. Hall’s many travel and scientific publications reveal a man who combined professional interests and credibility with remarkably sensitive eye. …this well-written and highly entertaining book can be enjoyed by anyone interested in Victorian naval or scientific history.’ International Journal of Maritime History

'James McCarthy has skilfully drawn upon Basil Hall's two-volume diaries, Extracts from a Journal, that recount his experiences along the coasts of Chile, Peru and Mexico between 1820 and 1822. He includes previously unpublished and often revealing correspondence, as well as adding an extensive bibliography. ...a remarkable insight into the high society of both Edinburgh and London in the early 19th century. Above all, however, this book is a fascinating account of an extraordinary life, which hopefully may persuade readers interested in exploration, travel and historical biography to rediscover the writings of Basil Hall.' History Scotland

'This is the first complete biography of a fascinating man and his adventures at sea. At just 13, he joined the Royal Navy in 1802 and was involved in naval engagements during the Peninsular War. ... The author includes previously unpublished and often revealing correspondence which really brings the story of this remarkable man to life. A great read.' Sea Breezes

'Captain Basil Hall RN was indeed a most curious fellow. Son of a scottish aristocrat from whom he inherited a considerable interest in science, he joined the Royal Navy at the age of 13 years in 1802 (3 years before Trafalgar). His first naval engagements in America and Spain are well described, as is his career in the RN. It is, however, for his travels and achievements that this man really should be more widely known. ... If ever a man became known for his own curiosity, it was Basil Hall who was able to share his own adventures and travels by becoming a very popular author in his own right. In this work, author James McCarthy provides a readable, fascinating and probing insight into one of Scotland's most overlooked indivduals.' Ned Middleton

'...The result is a good read about a truly fascinating man, skillfully brought to life by an author not afraid to show his subject's negative traits as well as his many positive ones. It is good to see Captain Basil Hall put back on the historical "map" of his age through James McCarthy's comprehensive research and engaging style.' Undiscovered Scotland: The Ultimate Online Guide

'...a well intentioned ... effort to survey the range of Hall's undertakings, accomplishments, and epistolary connections. ...he has supplemented Hall's published work with extensive archival research, and quotes copiously from Hall's and his wife's correspondence with numerous early-nineteenth-century literary and scientific luminaries'. Journal of Historical  Biography