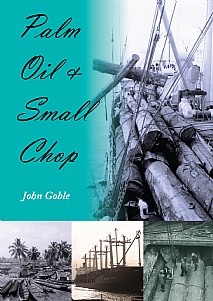 Palm oil is the quintessence of West Africa – it is complex, an acquired taste and reckoned to be rather unhealthy. Small chop is the addition of ingredients that make it palatable for European taste. From the unique perspective of working aboard merchant ships trading to the area, the author provides a viewpoint of the first 25 years of West African independence – it is simultaneously the story of the final years of many of the British Merchant Navy’s liner trades where fortunes largely depended upon imperial routes.

The author served in ships of three very different shipping companies, two British and one Nigerian, and from this unusual breadth of experience, a fascinating story of ships, their crews, their cargoes and the peoples from Senegal to Angola is told. The last of the famous surf ports, the navigation of the twisting waterways of the Niger Delta and the ascent of the great Congo River are vividly described. A colourful picture is painted of the astonishing variety of cargoes and how ships almost literally felt their way across treacherous mudbanks, picked their way through mangrove-bordered creeks with local pilots boarding from canoes.

The reader also meets the local inhabitants who include hard-working men from the desert interior, their more wily brethren from the coastal regions, itinerant traders and plausible rogues, the cowed workers of Portuguese Angola and, above all, the famous Kroomen of Freetown who helped work the ships around this intriguing coast of crashing surf and foetid creeks.

With the fortunes of the new nations faltering, the Palm Line ships are forced to find work in other trades. The author experiences daily life in Poland under martial law, later finding himself on voyages to Brazil, the Indian sub-continent and Australia aboard ships primarily designed for the West African ports. Told sympathetically, yet with a keen eye for the absurd and downright funny, this is a lively, informative story of ordinary people trying to make a living in a world where events, over which they have no control, change their lives irreversibly.

A well-written book that will appeal to all who are interested in ships and shipping, modern and maritime history, with a special interest in West Africa. It will also attract readers who enjoy well-told traveller’s tales of fascinating people and places.

'...it deserves to be read by anyone interested in the maritime trade and economic history of West Africa. ...it will surely come to be seen by historians as a significant primary source, particularly as regards the social relations and operational details of merchant shipping to "the Coast." It is an extremely good read: written in a colloquial - at times even racy - style, with some excellent anecdotes and vivid evocations of people and places, I found it hard to put down.' International Journal of Maritime History

'... I would highly recommend the book to our readers.' Shipping Today and Yesterday

'This delightful book... ...has a sub-plot: a chronicle of the final years of the British Merchant Navy's liner trades where fortunes largely depended upon imperial routes.' Telegraph

'The best books by seafarers succeed in combining a personal narrative retaining the reader's interest with a vivid description of a trade and a way of life which have both passed. John Goble's account of his life in three companies trading between the UK and West Africa is certainly one of the best this reviewer has read. ...But it is West Africa, in all its fascinating richness and at times poverty, seen from the bridge and offices of a cargo liner, that is the focus of this book, and one doubts whether it could have been better observed or recorded. ...its content is all but priceless.' Ships in Focus Record

'...the author has many other fascinating experiences to convey in lively detail and language... ...there are beautiful and fascinating places to visit... ...vividly conveys the liveliness, humour, mood changes and bizarre customs on the coast. Thankfully, the narrative is all the more authentic and evocative in being devoid of the curse of political correctmess. ...is very well written.' QSO.

'John Goble weaves over two decades of personal experience working aboard British merchant ships from the 1960s through the mid-1980s with historical accounts of maritime trade with West Africa. Through his articulate composition and intimate collection of photographs, Goble invites readers into a world of hard work, hierarchy, and distinct experiences. Goble's account is exceptional... ...one of the rare depictions of West African trade is both narrative and visual. ...these historical and cultural accounts enhance the flavor of the upcoming selection and provide the reader with context. ... In addition to these hidden gems, a selection of Goble's personal photographs related to West African trade supplements the rich writing of Palm Oil. ...Goble's exquisite memoir, encapsulating his collective experience at sea and inviting readers to embark on one of their own.' Sea History