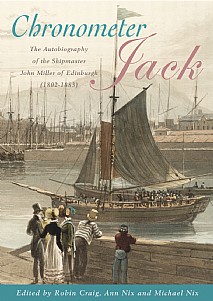 The Autobiography of the shipmaster, John Miller of Edinburgh (1802-1883)

From a chance acquisition of a battered leather-bound notebook, an extensive and extremely well-written narrative was revealed which recounted the life of a midshipman in the East India Company, through to the time when he owned his own vessels and settled in Tasmania.

Chronometer Jack is an outstanding autobiography by John Miller, an Edinburgh-born Shipmaster and Coastguard officer, an educated man whose working life commenced on board East India Company ships. It provides many insights into the tough but sometimes amusing life under William Younghusband on the Lord Castlereagh, the tyrannical Tommy Larkins on the Marquis Camden and Thomas Balderston on the Asia. Seconded to an opium vessel and the associated risks of trading in opium in the 1820s, Miller experienced the trauma of capture by the Chinese.

Returning to Scotland, he married Jessie Adamson, the sister of John and Robert, famed pioneers of photography. Later, Miller set up in business as a master-shipowner in the convict colony of Tasmania, trading mainly with Sydney and Port Phillip. The gripping narrative is full of incident and unforgettable characters and his first-hand observations on society in Van Diemen's Land when still a convict colony make compelling reading.

Bankrupted, Miller and his family were forced to return to Britain where circumstances forced him to join the Coastguard, serving in Northumberland, Tynemouth and Lincolnshire. His frustrations and bureaucracy, the higher status accorded former Royal Navy Officers and, in his recruiting capacity, the relatively poor quality of seamen joining the Royal Naval Reserve, constantly surface in the text - a rare insight into the occupation and tribulations experienced by a Coastguard officer in the 1850s and '60s.

Although Captain Miller's original manuscript included numerous references to people identified only by an initial letter, most of these were subsequently identified, providing his narrative with a rich and well-attested circumstantial context.

A book that will appeal greatly to anyone who enjoys naval and maritime history, modern history and autobiographies. It will also be of interest to ships and shipping enthusiasts and anyone looking for an engrossing and entertaining read.

'He lived a remarkable life, and he describes numerous adventures including calls at St. Helena when Napoleon was imprisoned there... All this is told with humour and great gusto, which makes Chronometer Jack an excellent read, particularly for anyone with seafaring links to Australia, India or the Far East. And to discover the origin of the author's nickname, you will have to read the book.' International Tugmasters Association

'... an excellent edition of Miller's memoir which gives us a detailed picture of many aspects of life at sea and ashore for a British shipmaster in the period 1819 to 1865 ... this well-produced book presents a fascinating story which will be of interest to both maritime historians and scholars.' International Journal of Maritime History

'...a fascinating and exciting story ... Chronometer Jack is a thrilling read, and paints a picture of a life at sea. It's full of gripping yarns and unforgettable characters, yet is informative and insightful.' Preview

'This book is an entertaining and captivating account of the working life of a 19th century shipmaster and coastguard officer. ...Once started, this historical narrative is hard to put down ... filled as it is with so much incident and unforgettable characters. ...Chronometer Jack gives us a rare account of an extraordinary life in the days of wooden ships and iron men! Highly recommended'. The Nautical Magazine

'Perhaps most interesting are Miller's observations on the human aspects of his profession. His descriptions of the officers and men he served with throughout his long career are detailed and, at times, humourous. He had a keen eye for detail and the book is full of descriptions of poets and historic occurrences. ...Readers will find this book a fascinating view of British merchant seafaring life'. Naval History

'...an intriguing look at the maritime world of nineteenth-century Britain. ... The final result is that the captivating and imformative tales told by John Miller reveal the realities of British merchantman life while referencing the themes in a larger context of nineteenth-century history.' The Northern Mariner

‘…A compelling account of an extraordinary life’.  Julian Stockwin