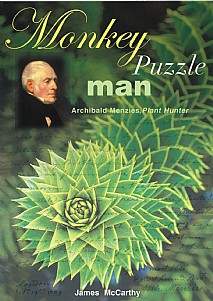 'This richly detailed account of the life and travels of Archibald Menzies is a most welcome addition to the literature of botanical exploration. ...we now have a satisfyingly comprehensive account of the life of a Scot who travelled the world as a surgeon naturalist in the Royal Navy'.
Extract from the Foreword by Professor Stephen Blackmore, FRSE, Regius Keeper, RBGE

Archibald Menzies was one of a legion of intrepid Scots plant collectors in the 18th and 19th centuries who roamed the world and, by a combination of toughness and knowledge, established the foundations of the botany of the British Empire. This is a fascinating tale of how he brought the monkey puzzle to England for the first time and provides an insight to international plant collecting in the 18th century.

Based on his diaries, the author recounts how Menzies, whilst on a classic voyage of exploration in which he circumnavigated the world twice, is the only naval surgeon to be placed under arrest for insubordination - and all because his precious plants were washed away! He is also the only man to have pocketed his dessert at a foreign presidential banquet, which subsequently resulted in the introduction of one of the most curious trees to Britain's parks and estates.

The Author tells a tale of high adventure on land and sea in the latter part of the 18th century, from a surgeon's grisly work at the Battle of the Saints in the West Indies to the seductive allure of Tahitian maidens and plant collecting in freezing Alaska. Menzies was the first to ascend the fiery volcano of Mauna Loa in Hawaii, where the natives aptly descibed him as 'the red-faced man who gathered grass and cut off men's limbs'. An acclaimed naturalist, Menzies made major botanical dicoveries during the epic journey of HMS Discovery under Captain George Vancouver along the north-west coast of America in the early 1790s, discovering many plants which now adorn British and continental gardens. He also described the Californian condor and made important early anthropological observations on the native peoples of North America.

In this highly readable book, the author recounts the story of how a young Scots gardener from humble origins became a distinguished plant pioneer who changed the face of gardens throughout Europe by his botanical discoveries.

Will be of immense appeal to everyone with an interest in botany, plants and plant collecting, exploration, discovery, travel and historical biographies.

'...a complete picture of the life of an admirable man with a passion for discovery. And plants.' Scottish Geographical Journal

...not just a good read about a plant hunter but also much else about the difficulties of exploration in the second half of the eighteenth century. ...McCarthy has succeeded in putting together a splendid account of a remarkable Scot and enriched the pages with plenty of illustrations in black and white, plus six pages in colour. ...a most professionally written and scholarly work... ...this excellent and much recommended book,...' BRISC Recorder News

'This is an accessible and fascinating biography of a Scottish 'Man on the Make' who used the opportunities awarded to him through the British Empire to satisfy his keen interest in botany and relentless pursuit of knowledge.' International Review of Scottish Studies