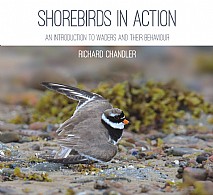 An Introduction to Waders and their Behaviour

Shorebirds, or waders, are a large group of small to medium-sized birds that occur worldwide, in a wide range of predominantly coastal or wetland habitats. Some species are largely sedentary whilst others are amongst the world’s most migratory bird species, travelling thousands of kilometres in a few days.

In addition to describing physical behavioural traits such as feeding, breeding, migration, and particular physiological adaptations, Shorebirds in Action also covers territorial behaviour both when feeding and breeding. There is detailed discussion of the range of species and their different lifestyles together with feeding strategies, flocking, roosting and the avoidance of predators. The seasonal features of shorebirds’ lives are included, such as the various plumages that they have when breeding, or not breeding, together with the intervening periods of moult, during which the birds change from one plumage to the next.

Shorebirds in Action is in two parts – firstly basic behavioural information and then a photographic section that explains the specific behaviour being illustrated for that particular shorebird at the time the photo was taken.  In addition the book can be read as a general text, split into chapters that provide the basic behavioural information and also by reference to the extended photograph captions which explain the details of the particular behaviour shown.

The book contains excellent photographs of about 180 shorebird species – over three-quarters of the world’s total – and therefore provides a general reference for the identification of shorebird species and the recognition of their various plumages. It will be relevant to readers worldwide, including Europe, North America and Australasia. This comprehensive work can be read as a general text and also the photographs can be enjoyed separately in their own right. Detailed references to source material are provided.

This will be of huge appeal to all ornithologists, as well as anyone with an interest in birds and shorebirds in particular.

‘…the images, the core of the book, promise to give pleasure to all readers for years to come. …a valuable reference for anyone interested in bird behavior… …I was eager for examples of behaviors that allowed me and my team to catalog video footage in a systematic way, and this book helped tremendously’. Marine Ornithology

‘…the author uses his striking photographs to illustrate behavior and demonstrates group connections among species. …the pictures work as hard as the text in making this a most enjoyable book’. Country-Side

‘…combines visual storytelling and short text snippets to reveal to us the busy and diverse life of shorebirds. …the images – the core of the book – promise to give pleasure to all readers for years to come. The book is a valuable reference for anyone interested in bird behavior… I study shorebird antipredator behavior…and this book helped tremendously. There is not a definitive encyclopedia of shorebird behavior, but this book by Richard Chandler serves as proof of concept of one’. Marine Ornithology

‘...a myriad of fascinating insights... ...the most eye-catching feature of the book is the wonderful array of photographs... ...an outstanding introduction to one of our most-loved groups of birds. ...a richly informative book. Whether you are new to waders or an experienced wader-watcher, you will find much of value here’. Birdwatch

‘...a magnificent introduction to the world of waders ... a book to enjoy and to learn’. Blog of Gorka Gorospe, Birder

‘Those looking for a beautiful and informative book on winged waders will do well to pick up Shorebirds in Action, An Introduction to waders and their behaviour. ...offers a balanced blend of spectacular photographs and engaging text representing a lifetime of work. Highly recommended for anyone interested in the fascinating lives of wading shorebirds’. Eco Magazine

‘...an excellent introduction to the lifestyle of the waders...also a beautiful collection of images of 180 species of waders’. Linnut

‘A well illustrated introduction to the biology of shorebirds’. The Birdbooker Report

‘...excellent photos, many in double-page spreads, are a stand-out feature of the book. The book is attractively produced... A pleasure to browse through, it can be enjoyed for its photos alone, but the text is very readable, providing insight into the biology of shorebirds. It is highly recommended for anyone who wants to know more about this fascinating group of birds...it is sure to inspire readers to take a closer look at the next shorebird they see’. British Birds

‘...a lavishly illustrated survey of shorebirds globally, with photographs of more than three-quarters of the world’s 243 shorebird species. This visual feast of shorebirds is bound to be appreciated by anyone with an interest in these fascinating birds’. African Birdlife

‘...turn the pages and enjoy the photographs. Having enjoyed the sensual pleasure read on’. Fatbirder Click here to read the full review here

‘for those with a general interest in birds Shorebirds in Action is a ‘must read'. ... What I particularly like are the countless and captivating photographs taken specially to illustrate the particular point being made by the author. ... the book includes fascinating case studies about shorebird migration... It is doubtful that much more information could have been included’. Wildlife Detective, The Blog of Alan Stewart Click here to read the full review here

‘I’m a big fan of books that blend photography and the written word...Shorebirds in Action provides a great example of how it can be done well. The book focuses on the behaviour of waders and uses carefully-chosen images that illustrate the themes covered in the text. The text is readable throughout... This is a book that could certainly be read from cover to cover as a lively and engaging introduction to waders. But it is also well-suited to dipping in and out of... ...it’s a book that is virtually impossible to pick up without starting to flick greedily through the pages. The book is a real labour of love and one that I would highly recommend to anyone interested in these birds or willing to become so’. Mark Avery read full review here

‘Bird watchers will love this book. ...fabulous photographs and fascinating information, it really is a great read. ...a real gem as well as a great source of information’. Burnley Express, Rebecca Hay

‘...the photography will initially grab your attention, the text is genuinely interesting and often entertaining. ...will certainly expand your enjoyment of Charadriiformes. ...is a unique book ...You will find a lot to enjoy in Shorebirds in Action’. Bird Observer

‘…you could benefit from this book … combines the information interestingly with appropriate photos.’ Gil Porter

‘…The text is lively and well-informed. …The photos are excellent …have been chosen carefully to illustrate points about behaviour and plumage. …a nice book as a present for any serious birder.’ Scottish Birds

‘…Photographs and text take up roughly equal space and great care has been taken to amalgamate the two into a coherent and well-organised volume.’ Australian Wildlife

‘…a magnificent introduction to the world of waders … a book to enjoy and learn’. Gorka Gorospe