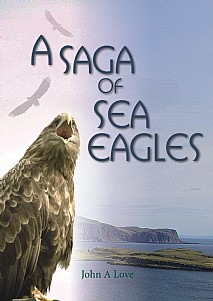 A Saga of Sea Eagles

This is a much-needed update on a pioneering reintroduction project and its much-celebrated success. It also provides essential background and a logical and objective summary of its justification and significance in global conservation terms. It is very much a personal account, although fundamentally based upon and cognisant of the science, deriving much from the author’s own experiences and researches, and liberally illustrated mostly by the author’s photographs and drawings.

This intimate account tells all that has happened since the reintroduction of the White-tailed Sea Eagle first began and exactly how its successes over the subsequent three and a half decades have received such worldwide recognition and acclaim. It describes the pioneering Rum releases (Phase 1) with which the author had been intimately involved, summaries of the Wester Ross (Phase 2) and East Scotland (Phase 3) releases with up-to-date information on the current Irish project in Kerry.

The book includes a classification of the eagles and their folklore and information about the bird’s history, distribution and biology including its breeding and feeding habits. The reader learns how the kudos of having Sea Eagles nesting locally has brought considerable economic benefit to Scottish communities, as it has in Norway and elsewhere.

Sure to be of immense appeal to all birdwatchers and anyone with an interest in and appreciation of wildlife, the natural world and conservation. Since so much success was achieved since the Reintroduction Project began, A Saga of Sea Eagles will be the definitive book on this pioneering work.

'The fascinating story of a man's life spent working to reintroduce and protect the white-tailed sea eagle has been revealed in a new book. ... His new book gives a classification of the eagles and their folklore with information about the bird's history, distribution and biology, including its breeding and feeding habits.' John O' Groat Journal

'Written with...passion is John Love's study of the mighty sea eagle in Scotland. ...an account not only of their fortunes in Scotland but a story of John's personal commitment to restoring this avian superstar back to Scotland. John's book is comprehensive. ...offers a wonderful insight into all aspects of the sea eagle's life and is a lovely mix of scientific detail and personal anecdotes. ...this book is a visual feast... ...this is a wonderful addition to any bookshelf'. Natural bookshelf, Scotland's Nature

'...I was pleased to see John's expressive sketches at the end of each chapter. ...an insightful personal account of Sea Eagles in Scotland accompanied by authoritative research and told in a gentle, humorous style making it an enjoyable read'. Scottish Birds

'Enriched with photographs and illustrations, the book is not only an intriguing account of this bird's plight, but is also an extremely informative guide to the many species of the eagle we have in the UK.' LandLove Magazine

'...is certainly a personal narrative... ...appeal to a broad audience of readers. ...write informatively of roles and experiences... ...the book as a whole is superbly illustrated... ...a very good read'. ECOS

'...adding a great deal that is new after two decades of progress. ...a most attractively written and presented book, with excellent drawings and most of the photographs by the author. Altogether it is a most welcome addition to the library of anyone with an interest in the Scottish natural world'. Recorder News

‘... is a compelling read. It tells this remarkable story in great detail, with plenty to interest the general reader as well as garnering sufficient science to satisfy anyone who needs to know the inside leg measurement of the world’s fourth largest eagle. It is also a valuable social history as an account of just how much attitudes to our fellow creatures have changed over the course of one short century’. Ileach

'He has made this new book very much a personal history of events, often going off into fascinating (and frequently amusing) accounts of his own and his fellow workers' adventures. ... This is an important little book, as much for its wealth of information and insight as for its value as a very detailed historical record. It is superbly illustrated, with masses of colour photographs and lots of the author's wonderful drawings. ...we should be enormously grateful to John Love for pulling all these strands together for us, and for doing it so well'. IBIS

'This new book brings the story up to date and includes much new material... It is very much a personal account with numerous anecdotes, personal reflections and a comprehensive selection of the author's own photographs, spanning several decades of hands-on involvement in the project. ...a lively and interesting read'. British Birds

'This is a wonderful book. Very readable and full of information... ...I really liked the overview of the Sea Eagles of the world and also the very interesting chapter on the prey of the White-tailed Eagle. ...the most detailed account of this reintroduction programme, the people involved and all the important steps that eventually lead to an increasing population. ... Highly recommended for everyone interested in the biology and conservation of the White-tailed Eagle or raptors in general'. European Raptors

'...an appropriate moment for a book on Sea Eagles to be published, and A Saga of Sea Eagles marks the occasion well. ...makes the book more than a first-hand (and fascinating) account of a pioneering reintroduction project; it is also a useful and very readable reference work on Sea Eagles. ...a book for anyone who can appreciate this rare success'. Wild Land News

'...brings up to date a real conservation success story... ...sections are full of information which is interesting and easy to read...Illustrated with an impressive number of colour photographs, it is written with humour and feeling...' BTO News

'It is a most attractively written and presented book, with excellent drawings and most of the photographs by the author. Altogether it is a most welcome addition to the library of anyone with an interest in the Scottish natural world.' BRISC Recorder News

'John Love is passionate about his subject and this comes across on every page. He is modest about the part he has played in bringing about the return of the Sea Eagle to our shores but it is clearly evident that his contribution to this conservation project cannot be overestimated. This book is a good read for anyone interested in conservation, but it will particularly appeal to those who share the author's enthusiasm for now being able to see the White Tailed Eagle back in the wild in the country'. The Falconers & Raptor Conservation Magazine

'...it is a story of one man's dedication and unabated enthusiasm over the sea eagle. The fact that the sea eagle reintroduction is such a success is a measure of this infectious devotion and it comes through on every page. No wonder I consider John Love to be one of the best nature writers of today. ...is one of the most fascinating monographs I have ever read. ... John Love and the publishers should be congratulated on this book and the fact that it will be a classic'. Highland News, North Star, Lochaber News

'The incredible story of the magnificent return of the White-tailed Sea Eagle is presented in a very interesting manner... Everything from legends and palaeontology findings to stone carvings; from its natural history until its sad extinction from the British fauna. Even more interesting are the descriptions of all the efforts and misadventures on the way of the species "resurrection" before its majestic stilhouette appeared again...' Bulgarian Society for the protection of birds

'It's a FANTASTIC book and VERY interesting with many fascinating photos. A very well produced book. ...many congratulations to your book'. A bird watcher from Denmark

'John Love engages us in the ups and downs, the failures and successes of the Rum project. We can imagine the joy of his team when the transplant took, and what he calls "the first Gaelic-speaking sea eagle" was once again born, raised, survived and bred in the Hebrides'. West Highland Free Press

'The re-introduction of sea eagles is a great conservation success story, and John Love has played a vital role in it since the 1960s. He is an expert on the subject, but has chosen to write a memoir rather than a scientific report, and the result is superb. His book is full of anecdotes, humour, vivid personalities and dramatic places - St. Kilda, Rum and Fair Isle all feature'. Scotland Outdoors

'Love's highly-readable study... is probably the most authoritative work not just on the species but also on its acknowledgement of the contribution of dozens of dedicated individuals involved in the research project'. Lincs Bird Club

'Likely to become a valuable collector's item in the future, A Saga of Eagles is a superb book with is lavishly illustrated with photographs and exquisite artwork'. Grimsby News