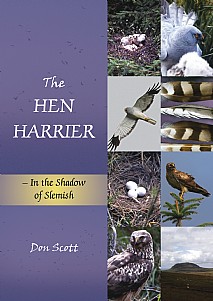 In the Shadow of Slemish

The hen harrier is one of the iconic species of the bird world and its history is a mix of controversy, persecution, and recent patchy recovery. This book, a dedicated study of the bird in N. Ireland for over two decades, provides a detailed account of the life, habits and prospects for the bird. The author presents much new information about the harrier in its continuing struggle to re-establish its hold despite high levels of persecution from man or predation by other species.

Having spent thousands of hours over many years studying these birds, he was rewarded by the discovery that this ground-nesting species was nesting in tall conifers in the forests of County Antrim – the only country throughout their vast European range where this occurs annually. Other significant finds soon became apparent as did the discovery that red kites were nesting for the first time and marsh harriers had returned to nest for the first time in almost 200 years.

The author’s passion for the bird is obvious as he shares moments of excitement and sadness, and he speaks frankly about the maltreatment and mismanagement of this elegant raptor over the years.

This is a book for the bird enthusiast, the environmentalist and indeed anyone with an interest in our wildlife and landscape – an unmatched account not to be missed.

‘I cannot recall an account of a bird that has been so moving, revealing the author’s passion for a bird despite all the problems. … Whilst it is packed with fascinating detail, it still makes easy reading and the author makes you feel you are part of this bird’s story of mixed success. It is more than a fitting addition to the latest books on hen harriers for anyone’s bookshelf'. The Highland News, The Lochaber News and The North Star

‘…the first such study of the species in Northern Ireland. It was a monumental undertaking and has been written up as a very readable diary. …his immense bank of knowledge and expertise… I would recommend this book to any raptor enthusiast, particularly those who undertake field work. It is an inspiring read, delightfully devoid of graphs, tables and stats, yet manages to present an absorbing scientific account of the species in County Antrim'. Bird Art & Photography

‘…another great read in a series of raptor books… …describes the biology, behaviour and conservation of this magnificent raptorwith a focus on Northern Ireland. But he also mentions observations from other places and other researchers and also draws comparison to other harrier species (he has observed all harrier species around the world). …Of particular interest are Don’s observations about tree nesting Hen Harriers, which is a rare behaviour and has rarely been observed outside of Northern Ireland. …easy to read and hard to put down. …a great read for anyone interested raptors in general or harriers in particular. Recommended'. European Raptors

‘One remarkable discovery involved in tree-nesting behaviour, which had been considered extremely rare in Hen Harriers, but in this population has been found to be relatively frequent. …it is very detailed and thorough'. BTO News

'Don Scott's new book is a well written and eminently readable account of his dedicated studies of this species in Northern Ireland. ... This book is an essential read for all those interested in the hen harrier and the conservation of birds of prey in general, and comes highly recommended'. Peregrine