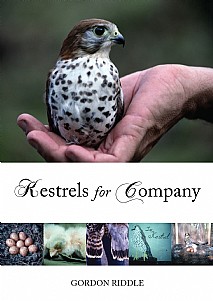 An appealing book that rightfully raises the profile of the kestrel. It provides an extensive picture of this delightful falcon, including its lifestyle and the factors that affect its breeding success and survival. This is based upon almost 40 years’ monitoring of the kestrel in south-west Scotland and further afield by the author and colleagues, giving a flavour of the integrated approach to monitoring and conservation.

As well as the wealth of factual data, there are entertaining anecdotes and stories both from the author’s experiences and from the wider media coverage of this raptor over the years. The reader is taken to exotic locations such as the Seychelles, Mauritius and the Cape Verde Islands to see the endemic island kestrels which have always held a great fascination for the author.

Latest figures show an alarming decline of 36% in the kestrel population in the UK, with even more dramatic falls such as 64% in Scotland. The fieldwork techniques which play such an important role are detailed in a composite breeding season. The kestrel is not portrayed in isolation and the bird’s current circumstance is tied into the bigger picture of raptor conservation and the struggle against sustained persecution.

The author reflects upon the political, economic and conservation issues that have dominated this field in the past few decades and through this personal and well-informed account the reader gains access to the world of the kestrel.

Kestrels for Company will appeal to a wide audience including all those with a special interest in raptors, birding enthusiasts, and everyone interested in nature and conservation.

'Profusely illustrated, the book shows kestrels hatching and in natural habitats across the globe, from Scotland to the Seychelles. His collection of enthusiasts' notes finds kestrels everywhere - even Downing Street'. The Critics

‘...this fascinating and absorbing book written by a dedicated expert. Over 40 years the author has assembled a wealth of information... ...is easily read and contains large numbers of excellent photographs...’ Scottish Birds

‘...has some fascinating stories... ...Riddle gives a vivid account of clashes between kestrels and such powerful raptors as peregrine falcons and goshawks’. Feather Report, The Times

‘...If you want to know about kestrels then this is the book for you... ...a well-documented history of the many species ... is one of the best accounts on the subject I have read’. Highland News, The Star and Lochaber News

‘An appealing book that rightfully raises the profile of the kestrel. It provides an extensive picture of this delightful falcon. ...through this personal and well-informed account the reader gains access to the world of the kestrel’. NHBS

‘...an appealing portrait of this beautiful bird and explores the problems it faces...’ Daily Mail

‘...personal and well-informed account gives valuable insight s into the private life of this delightful falcon. ...he combines a wealth of facts with entertaining anecdotes and experiences’. Ayrshire Post

‘...celebrates this species of falcon. Profusely illustrated, the book shows kestrels hatching and in natural habitats across the glove, from Scotland to the Seychelles’. The Critics

‘...the long- awaited sequel to Seasons with a Kestrel. ...a fascinating account of the author’s journey to see the endemic island Kestrels and meet the people directly involved in their conservation. ... Exciting and intriguing anecdotes ... captivate the reader and provide an informative and colourful overview ... of these magnificent Kestrels. ... Gordon Riddle’s passion for Kestrels is apparent throughout this well-balanced, richly illustrated and readable book, which also shows what it takes to be a truly excellent fieldworker. I recommend it wholeheartedly’. IBIS