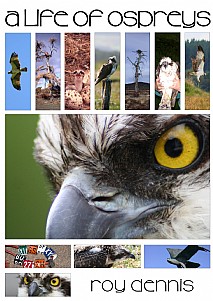 A Life of Ospreys

Ospreys are one of our best known and best loved birds and the name Roy Dennis is not only synonymous with the successful return of the osprey to Scotland, but is also renowned for his international work with a variety of species. From the time he saw his first osprey, back in 1960, Roy has worked to help this magnificent raptor establish itself once more in a country where it had been hounded and persecuted to near-extinction over hundreds of years.

This book tells the story not only of the osprey, but of the osprey watcher, following the bird's fortunes in Scotland, seeing its numbers rise from that single pair in the 1950s to close to 200 pairs today. From a look at its history in Scotland and the rest of the UK including the bad old days of egg thieves and the shooting of birds as specimens, it moves to the present day, with satellite radios allowing us to follow the every move of the osprey on its migration to Africa and back.

Roy has pioneered the building of artificial nests for ospreys, which had been instrumental in increasing their numbers and range, as well as starting the first European trans-location taking chicks from their nests in the Highlands and releasing them at Rutland Water Nature Reserve in the Midlands. The book also covers the ecology of the osprey with many personal anecdotes and insights.

Diary entries give a more immediate feel to the chapters, and the worldwide distribution of ospreys is enlivened by that sense of immediacy. Roy's writings, at a time when no one knew whether or not his lifetime's work would succeed, add a sense of history to this personal tale.

Sure to be of immense appeal to all birdwatchers and anyone with an interest in and appreciation of wildlife, the natural world and conservation.

Winner of the Birds Illustrated Conservation/Monographs/Science category
'...The book is stuffed full of photos and personal anecdotes, and it all makes for a highly readable account of one of our best-loved birds.' Birds Illustrated

So the book is part diary, part autobiography, part species account and part historical perspective. It is at all times fascinating and often very entertaining and we are also treated to excellent photographs and line drawings, maps and notes - a nicely considered mix...

Its tale is a fascinating one entertainingly told by Roy Dennis. I guarantee anyone who even lightly dips their big toe into this book will learn something and I defy anyone to not find themselves immersing themselves in its rich storehouse and terrific gallery. Fatbirder

'Roy Dennis has produced a hugely enjoyable and readable record... The book is semi-autobiographical - 'I looked through the drizzle across the forest bog and there - I can see it still - in the branches of an ancient Scots pine, was the male, peacefully preening his wet feathers...' and it shines with the commitment of an enthusiast - 'I fell under the spell, not only of these beautiful birds but also of Strathspey, its wildlife and its people.' Dennis' text is enlivened by excellent colour photographs, sensitive drawings by Alessandro Troisi, graphs and charts, by contemporary illustrations and cuttings, and also by rewritten diary pages, which succeed in personalising the author's own tale. ... Any reader will relish his account of the story so far.' HABITAT

'...his enthusiasm and single-mindedness and this exudes from him throughout this book. ...there are some outstanding pictures including ospreys taking fish and a close-up of an osprey's eyes that are so compelling. ...you can almost feel that you are there taking in the same experiences.' Highland News

'It is reasonable to assume that no-one else on earth knows more about ospreys than Roy Dennis. His fascination for one of the true superstars of the natural world has dominated much of his work as a naturalist for the better part of 50 years, a remarkable book. It is also an inspirational book... The sheer weight of acutely-observed detail amassed in this account is testimony to the knowledge of its author, and the clarity with which it is organised and presented establishes the book in the front rank of Scottish wildlife monographs. ... Scottish ospreys now have millions of friends all across the world, and this book will surely add to their numbers.' Scots Magazine

'...one of the most arresting nature books this year. ...the story of the return of this great fish-hawk to Britain, by a man involved in it almost from the start. ... His book has excellent photographs and also information on where to see osprey eyries.' The Times

'...fascinating accounts of astonishing events past and present and individual birds' life histories. Dennis's love and passion for Ospreys is apparent throughout the text. The rewritten diary entries and news cuttings succeed in personalizing his story... ...a most enjoyable read and an extremely difficult book to put down. I recommend it wholeheartedly' IBIS

'He writes with first-hand knowledge gained from a lifetime's experience of working with ospreys in the wild, punctuating the text with excerpts from his diaries, giving the book an added dimension. ... Everything one could ever wish to know about these birds seems to be covered in this book.' John Muir Trust Journal