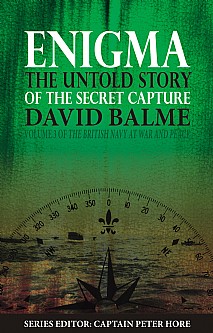 Enigma: The Untold Story of the Secret Capture

And so I became a friend of this delightful and courageous man whose perilous mission, and its consequences, had been too little known for half a century. Now, this stirring biography should ensure a permanent place for David Balme in the roster of quiet heroes on whom a country like ours depends. Extract from Foreword by Rt Hon Dr Julian Lewis MP

David Balme will be forever known as the 20-year-old hero who, on 9 May 1941, boarded a German U-boat in mid-Atlantic, and captured one of the greatest secrets of the Second World War. This capture – or ‘pinch’ as it was known within secret, inner circles – changed the course of the Battle of the Atlantic and shortened the war itself.

Balme was part of a team comprising officers and men of the Third Escort Group ably led by Commander Joe Baker Cresswell, also commander of HMS Bulldog, who shared the danger with other unsung heroes such as Lieutenant Commander George Dodds. Balme was tasked with taking the Bulldog’s whaler and a small party to board the U-boat U-110 which had been disabled. However he was alone when initially boarding, entering and searching the U-boat. This put him in a vulnerable position while descending into the vessel - he risked being shot by any German submariner that may have remained or blown-up by a booby-trap device. Furthermore he could have drowned when Bulldog disappeared into the mists of the Atlantic to hunt another U-boat, as U-110 could have plummeted into the depths at any time.

However, where others tried and failed or tragically lost their lives, Balme and his boarding party succeeded magnificently in capturing an entire Enigma machine, the essential rotors and months’ worth of associated cipher material. This was an absolute gift to the code breakers at Bletchley Park who were able to read all the secret German naval signal traffic for some months and it enabled them to read virtually the whole of the traffic for the rest of the war and with little delay. The capture was kept so secret that few even on the British side knew about it – not even the Americans were told what had been achieved after they entered the war.  Balme returned from the war and never spoke about the secret capture which he believed would be hidden forever.

The story of the capture and ransack of U-110 is told for the first time in the words and letters of David Balme, his captain Joe Baker Cresswell, George Dodds and others who took part in the most important submarine capture of the whole war.  Besides the capture of U-110, Balme enjoyed an astonishing variety of wartime experience including the Spanish Civil War, the Palestine Patrol, the sinking of HMS Courageous, the Battle of Convoy KJF3, the fight with the heavy  cruiser Hipper, the Battle of Cape Spartivento, the Battle of Convoy OB318, being sunk during Operation Harpoon, the air war in the Western Desert, the high level diplomacy of Prime Minister Winston Churchill and pioneering work as a Fighter Direction Officer in the war against Japan.

Will be of immense appeal to everyone interested in modern naval and military history and biographies. The story of Balme’s incredible achievements will enthral the general reader.

'Captain Peter Hore has put together a most remarkable story which is well worth a read'. In Depth

‘...in 21 compelling chapters – describes the build-up to the capture of Enigma, the event itself and its aftermath… It’s a tale of daring and courage.’ Nautilus Telegraph

‘A fantastic and enthralling book, I thoroughly recommend it.’ Royal Naval Sailing Association

‘Balme… made the most astonishing ‘secret capture’ of WW2… his spectacularly ripping yarn in full… is a classic naval biography… hugely enjoyable and entertaining, delivering the last word on various aspects of the U-110 episode.’ Warships International Fleet Review

‘This beautifully presented book, however, is more than a classic naval history – it completes a hitherto untold life story… a thrilling and enjoyable read… This book has been eagerly awaited. Peter Hore has succeeded in securing David Balme’s role in history.’ Ray Mayes

‘The whole account is given a well-written makeover… a thundering good read.’ The Naval Review

‘…an exemplar of personal courage and leadership of the highest order. …provides a wealth of materials on technicalities, strategy, events and biographical detail … illuminated by direct quotation from Balme’s midshipman’s journal, letters home, and recollections … This is a fascinating tale … We are truly fortunate that our island, faced with great evil, produced such men’. Army Rumour Service

“Thank you for your efficient service. ”
Alli, UK
“Thanks for the extra care in packaging. It arrived in perfect condition. ”
Belinda, USA
“Many thanks for your friendly, helpful and efficient service. It is much appreciated. ”
Chris, UK
Dunbeath, Caithness, Scotland KW6 6EG, UK T: +44(0)1593 731 333 E: info@whittlespublishing.com