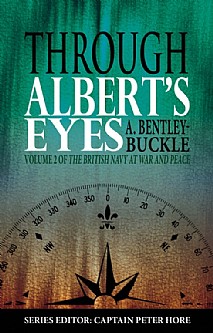 The autobiography of Tony Bentley-Buckle, a child of the Empire who was left to grow up in the care of maiden aunts. Having joined the Royal Navy before the war, he found himself on the Northern Patrol during the blockade of Germany and as a teenager in command of captured ships. When he brought a ship through the minefields into Scapa Flow, the young Midshipman Bentley-Buckle was interviewed by the famously ferocious Admirax Max Horton who recommended him for advanced promotion. In a fit of derring-do he volunteered for ‘special service’ without knowing what this meant and began training for one of Britain’s secret navies. As a beach commando he was one of the first ashore at the Allied landings on Sicily and one of the first Allied officers to cross the Straits of Messina. On Reggio beach he became one of the few people to order General Montgomery to stop talking and not to block the exit of the beach!

He was soon seconded even deeper into British secret services when he was lent to MI9, the escape and evasion agency, helping to rescue  hundreds of British prisoners of war in Italy. He was captured in a fierce hand-to-hand battle with the Germans, escaped, recaptured and was badly-beaten, eventually reaching Prisoner-of-War Camp ‘Marlag O’. There he helped organise one the cheekiest escapes from a prisoner-of-war camp by making the eyes for a dummy known as ‘Albert RN’. Post-war he learned to fly, sailed a small boat to East Africa and founded a shipping empire and an airline.

This is a remarkable and exciting true story including escape and evasion behind enemy lines in Italy, Yugoslavia and Germany; life in a prisoner-of-war camp and adventure in the Indian Ocean.

Will be of immense appeal to everyone interested in modern naval and military history and biographies. The storyof Bentley-Buckle’s incredible achievements in the face of almost overwhelming adversity will enthral the general reader.

'Tony Bentley-Buckle led a particularly adventurous life... ...a well-written and fascinating story and the descriptions of amphibious and asymmetric warfare have tropical value in Australia... ...his story is an interesting one and it is enhanced by a number of John Worsley's wartime sketches. It is a good read and I thoroughly recommend it'. Headmark

'...highlights a life of adventure, suspense and enterprise, first as a naval officer and later, as a commercial entrepreneur. ... Bentley-Buckle's tale leads readers all over the globe, from his father's plantations in Ceylon and boarding schools in Belgium, to combatting Germans in Arctic waters, on Italian beaches, in Yugoslav forests, and ultimately into a naval prisoner-of-war camp in northern Germany. ... Not unlike a Harrison Ford thriller... ...Tony Bentley-Buckle's memoirs are a riveting read for all types of enthusiasts as well as for the avid scholer seeking details into one man's daily life throughout the twentieth century'. The Northern Mariner/Le marin du nord

'This is a well-written and fascinating story and the descriptions of amphibious and asymmetric warfare have topical value in Australia as the RAN begins to establish its own 'beachhead commando' equivalents. Buckle was clearly a resourceful and determined man in both his naval and civilian careers; his story is an interesting one and it is enhanced by a number of John Worsley's wartime sketches. It is a good read and I thoroughly recommend it'. Journal of the Australian Naval Institute

'...a very interesting book... The author's five war years of the R.N. were rich and enthralling... ...for the author "civvy street" was almost as action-packed as his naval service; not as brief, hectic and dangerous as those five years, but a most absorbing series of varied and fruitful global travel and enterprises'. QSO

'...this is a story of 'daring do' well told with charm and modesty. ... The book is well produced and illustrated with family photographs and drawings, having good footnotes and a useful index. Highly recommended'. South West Soundings

'This is a remarkable story recounted by a remarkable man in his own words. Tony Bentley-Buckle (1921-2010) was a real-life James Bond - and more - whose long life was full of adventure and entrepreneurism on a grand scale. ... After reading his biography, you are in no doubt that he packed more into his war and his life than contemporary heros. ...compelling reading... He took part in one of the war's most audacious escapes, his part being to make the moving eyes of the dummy known as Albert RN (hence the book's title) - a story which was turned into a movie after the war. ... This enthralling book ends with some very useful explanatory notes and a comprehensive index.' Nautilus’ Telegraph


‘…is very modestly (and humorously) told, almost concealing the fact he was a man of extraordinary resource and capability … This is a fascinating adventure story, told in a very dryly amusing and laid-back manner, which I thoroughly enjoyed. Army Rumour Service