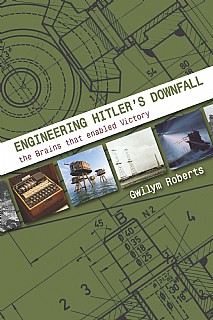 the Brains that Enabled Victory

Whilst living in Liverpool, Britain’s second most heavily bombed city during World War II, the author experienced at first-hand the terrible effects of the war on the civilian population and when studying at Cambridge he witnessed the American heavy bombers and their fighter escorts flying to attack targets in Germany and occupied Europe.

Serving as an engineering officer in the Royal Navy in HMS Sheffield provided first-hand realisation of the importance of engineering and emphasised that victories achieved in the Battle of Britain and other campaigns were made possible by newly-developed machines, equipment or techniques. These innovations gave the Allied forces a significant advantage and helped ensure eventual victory.

Engineering Hitler’s Downfall features numerous inventions such as the decoding machines developed at Bletchley Park; the hand-held mine detectors that cleared pathways through enemy minefields, firstly  at the Battle of el Alamein but also in most subsequent actions; the newly-located factories and tanks that enabled the Russians to repulse the German invasion; the escort carriers and long range aircraft that enabled U-boats to be attacked in the mid-Atlantic; the 4000 plus Bailey bridges that allowed narrow ravines and rivers as wide as the Rhine to be crossed; the Mulberry harbours through which the D-Day bridgehead was reinforced and supplied and the pipelines under the ocean that supplied fuel for invading troops. These and many other examples illustrate what was achieved under such immense pressure.

The book includes timelines to set it all in context with respect to the course of the war.

God, Churchill, and the Engineers
A Battle of Wits
Land Battles Lead to Dunkirk Evacuation
Radar, Battles in the Air, and the Blitz
Women at War
Atlantic Agonies
The Worst Journey in the World
The End of the Beginning
The Beginning of the End
Southeast Asia and the Bellicose Pacific
The 3 Rs of the Post-war World

This interesting and enlightening book will be of great appeal to engineers, anyone with an interest in World War II and military history.

‘…Gwilym Roberts takes an insightful look at these milestones and the individuals behind them that played such a pivotal role in success of the war effort. …takes a walk through the technical development of the Second World War that will both enthral and fascinate the reader into mysteries of the engineering mind’. Civil Engineering Surveyor

‘…is lavishly illustrated with photographs, maps and diagram. Each chapter covers a single campaign, such as ‘Radar, Battle in the Air’ and ‘Atlantic Agonies’ so that by the end we have, in effect, a potted history of the war from the British perspective’. Warship World

‘It’s a fascinating read that includes time-lines of key events… A lasting tribute to the remarkable ingenuity and invention of these amazing scientists’. Sea Breezes

‘I have, to be honest, become a little fed up with WW2 books and Hitler in general. That was until this wee gem of a book arrived. I rate this book very highly for bringing to us the science of war engineering in such a clear and enjoyable way, every time you pick it up you will learn something new… Definitely a keeper and will go into my library under “read here for fantastic facts”… …a great read’. Army Rumour Service read the full review here

‘This intriguing book provides a fascinating catalogue of engineers, scientists and inventors with their many and varied military inventions…Very well illustrated throughout, I thoroughly enjoyed, and learned much from, this fascinating book’.  Scuttlebutt Magazine​