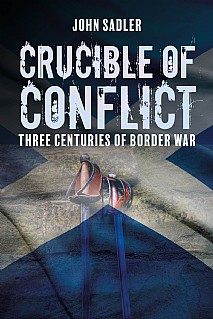 The borderers – people forged and hardened by endemic warfare over generations, whether by raids and skirmishes or set piece battles – are marked even today as a distinct group. For three savage centuries England and Scotland, both dynamic races, slogged it out upon this arena of nations. Scott might have reinvented the border as a sweep of chivalric romance, but the reality was very different.

John Sadler knows this ground and its people; he is one of them. For half a century he has traversed the borderland, and has taught, enacted and written about them. In this book he offers a uniquely personal but highly informed view. He neither praises nor condemns them, but seeks to understand and, perverse as it may seem, admires them.

History leaves its imprint and like the proverbial stone cast into still waters, it sends out ripples through time that never quite abate. The feuds were pursued with increasing savagery and even when not in outright conflict, the names on both sides continued their ‘feids’ or vendettas in crazy bloodletting for decades, with cycles of escalating violence creating a dizzying maze of interlocking enmities that was beyond all reason.

The late, great George Macdonald Fraser once remarked that the borderers were free in a way we can never imagine. And they were.

Here is a book that weighs the evidence from a plethora of sources to provide a compelling history of this border conflict. In the modern political scene, with the issue of a second referendum pending, the theme of a cultural identity, forged in the fury of those Border wars, forms a pivotal theme in the debate.

Introduction – The Border Line; Genesis of a Frontier; Fall of the Hammer; Chevy Chase; ‘At Homildon Met’; Games of Thrones; Seasons of Discontent; Flowers of the Forest; A Very Rough Wooing; Those Middle Shires; Revolution and Reinvention; Glossary; Bibliography of primary and secondary sources

This is an absolute must for anyone interested in the history of the border wars, Scottish history in general and independence.