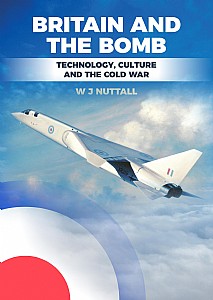 Britain and the Bomb

Technology, Culture and the Cold War

Extract from Foreword by the Rt Hon Lord Owen
... contributes to a much- needed understanding of the concepts relating to the UK building and retaining its own nuclear weapons-based deterrence strategy against evolving threats and huge technological advances.  ...  Bill Nuttall considers our earlier national journey from Empire to Europe and the transition of British nuclear weapons from the Royal Air Force to the Royal Navy.

This is a very British story from more than 50 years ago. It is a story of remarkable technological ambition from a different country than is seen today. It was an era in which the country adjusted to decolonisation and a dangerous nuclear arms race close to home.  The maturing Cold War engineers of the British aviation industry sought to outdo the nationally-celebrated and frankly propagandised achievements of their fathers’ generation. Meanwhile, black and white post-war austerity was being replaced by the colour and rhythms of the swinging sixties. For everyone, engineers or otherwise, the country was changing fast.

Britain and the Bomb tells one of the great British stories from the Cold War – the transition of the nuclear deterrent from the Royal Air Force to the Royal Navy. The author draws upon insights from the laboratories, the military, popular culture and from politicians to make sense of a complex time and to challenge some widely-held perceptions that Britain in the 1960s lost her technical ambition and ability. Rather than industrial chaos and short-termist leadership, there is instead a story of shrewd, but pragmatic, moves in the chess game that was the Cold War. The author looks at how Britain saw the role of nuclear weapons, providing insights for the decisions that now lie ahead for Britain in the twenty-first century.

The story pivots around a single day in April 1965. The recently-established Labour government very publicly cancelled the much-vaunted TSR2 nuclear strike bomber, causing dismay among aviation enthusiasts. The passing decades have done little to diminish the controversy and a pervasive sense of nostalgic melancholy about a lost Britain. What really happened to the TSR2 and more importantly what happened in the years that followed? By taking a wider view, the merit of the 1965 decision is apparent, providing better understanding of the even bolder and more ambitious decisions that were needed into the 1970s. Those bold actions were once highly secret and are still not widely-known or understood. While Britain very publicly cancelled her strike bomber ambitions she very secretly pursued a different nuclear weapons project: the ‘Chevaline’ upgrade of the submarine-based nuclear deterrent. That engineering success deserves to be remembered.

This is a fascinating book that takes us back to a time of British boffins, supersonic test pilots, mods, rockers and Cold War spies.

This will be of especial appeal to anyone interested in modern history, the Cold War and nuclear technology policy.

'This is a good, readable volume...' Aeroplane

'...This intriguing and fascinating book... is also a fitting tribute to the British Aero industry of the post war period. ... is well written, ... evoking the atmosphere of the period, drawing on popular culture and fine art and key personalities from the Battle of Britain. ...will appeal greatly to all interested in the history of the Royal Air Force and also students of the Cold War and Britain’s defence policy in the early post war period'. Scuttlebutt, Journal of The National Museum of the Royal Navy

‘…does a good job of providing a detailed account of the development of the TRS2 and its cancellation… If you’re interested in the TSR2 project this book is for you’. The Naval Review

‘W.J. Nuttall’s fascinating account of technology and culture surrounding one often overlooked aspect of the Cold War: the nuclear strike bomber TSR2, which in April 1965 was cancelled by the Labour government. … Where Nuttall excels is by placing the Cold War in a social and technological context that invites the reader to come to a closer understanding of why this complex aspect of recent history…is so important. It’s also a vital parable for our time’. E&T, Engineering and Technology (see full review here)

'...this is an interesting read...' The Aviation Historian

‘For those of us who haven’t thought too deeply about nuclear warfare recently it is a timely reminder…It is a very good book, well written and well researched, covering a wide range of topics.  It is timely and I suggest that you buy a copy for the young people in your lives’.  Army Rumour Service, ARRSE

Flight from the Croft
Bill Innes