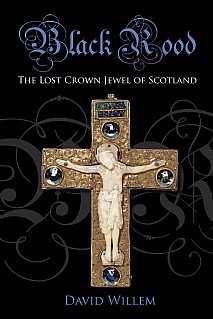 The Lost Crown Jewel of Scotland

Black Rood tells the fascinating story of one of Scotland’s oldest and most significant crown jewels. Once as famous as the Stone of Scone, the Black Rood was a gold and jewel-studded reliquary for a piece of the True Cross. This profound and holy treasure was smuggled into Scotland after the Norman invasion by the sister of the last Anglo-Saxon king of England. On her marriage to King Malcolm III, the Black Rood passed into the Scottish royal family, and so became a symbol of the authority and legitimacy of Scotland’s kingship. Giving its name to the abbey and then the palace and now the parliament of Holyrood, the Black Rood was to help define Scotland as a kingdom which was at least the equal of England in the eyes of God, and in some ways superior to it.

David Willem tells the story of the Black Rood through the lives of the kings and queens of Scotland and England who honoured it, treasured it, enacted themselves through it, fought over it, and who sometimes died clutching it, so creating a history in vivid human detail that ranges over a thousand years of Scottish and English history.

At the same time, the author tells the story of two other similar reliquaries of the True Cross – the Croes Gneth of Wales and Ireland’s Cross of Cong. Like the Black Rood, these Irish and Welsh crown jewels helped define the autonomy and independence of their nations, and both were to follow similar trajectories through time. The book ends with the mystery of what happened to the Black Rood, and explores the possibility that, like the Cross of Cong, it might still exist and be waiting to be found.

Together these stories create a new and compelling perspective on the relationships between Scotland, England, Wales and Ireland, just when those relationships are changing again for the first time in hundreds of years.

This will be of immense appeal to everyone with an interest in the history of Scotland in the context of the other nations, Scottish heritage and specifically the True Cross.