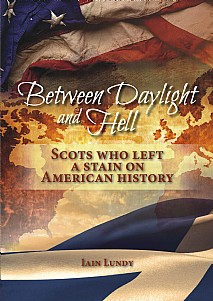 Between Daylight and Hell

Scots Who Left a Stain on American History

This is the culmination of years of research into the lives of Scots who were guilty of dastardly deeds after leaving Scotland for America – in some cases they literally got away with murder. These emigrants were rogues, con artists, charlatans and reprobates of the worst order and their crimes are laid out in detail. For each character the author relates their early lives in Scotland, family backgrounds and why they left to make a fresh start in the New World.

These include William Stewart, who butchered victims as they tried to flee a massacre perpetrated by members of a religious sect; conniving Charles Forbes, who fleeced brave World War One veterans to the tune of millions of dollars to line his own pockets; William Dunbar, a son of the Scottish Enlightenment who was only too happy to mete out brutal punishments, including hanging, to his negro slaves in the American south; or the hapless Adam Stephen, who led troops into a crucial Revolutionary War battle while drunk as a lord – and attacked men fighting on his own side. They came from all over Scotland and their foul deeds spanned a continent – colonial Virginia, the Mormon State of Utah, Chicago, Boston, the Texas hill country and the Pacific coast of California.

However, history has been relatively kind to this band of ne’er-do-wells. Their crimes may have made headlines for a brief time after the event but the vast majority of these scoundrels are ‘unknown’ instead of being cloaked in notoriety for their crimes.  Auld Scotia rightly basks in the glory of the well-known achievements of other emigrant Scots but there is another side to the coin, the exploits of these unsavoury individuals who made their way across the Atlantic, and this book brings them to a certain justice, albeit some time after the events.

This is a rollicking good read, comprehensively researched by one of Scotland’s most experienced and respected journalists. Everyone loves a good ‘baddie’ and this book is full of them.

An unmissable read for anyone who enjoys scandalous tales, but particularly for all Scots, whether at home or part of the wider Scottish diaspora.

‘...a well-written and beautifully researched book that explores the lives of 16 Scots who settled in America and whose deeds earned them infamy rather than fame... ...for a book looking at the darker side of the Scots abroad you won’t find a better tome’. Scottish Field

‘...a well written and beautifully researched book that explores the lives of seventeen Scots who settled in America and whose deeds earned them infamy rather than fame. The book’s cover reports that “everyone loves a good ‘baddie’ and this book is full of them.” It is, and their stories are fascinating’. Undiscovered Scotland  Read the full review here.

‘...it makes some fascinating reading… for a book looking at the darker side of the ‘Scots abroad’, you won’t find a better recent tome… a well written and beautifully researched book’. Arran Banner

Safari guide Jeff Williams has brought together a treasure-trove of stories of dramatic events th...