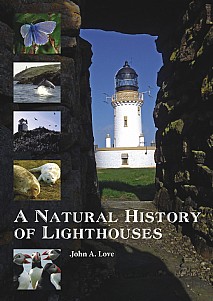 A Natural History of Lighthouses

This is the story of lightkeepers’ contributions to the natural history of lighthouses in conjunction with the history and maintenance of the manned navigation beacons – their primary function of course – ‘for the safety of all’. Since keepers were first engaged to maintain lighthouses around our coast they have encountered wildlife, and in some cases developed a keen interest and expertise on the subject. Towards the end of the nineteenth century keepers were encouraged to submit annual returns of bird movements enabling reports on bird migration and several authoritative books to be compiled. As a result, ornithologists began to recognise how many lighthouses were well-placed to establish bird observatories – a few were in redundant lighthouses, often on offshore islands.

However, lightkeepers also recognised that in certain weather conditions and during migration times, flocks of birds were attracted to the beam, resulting in many fatalities. While the problem is now better understood and considerably reduced, the automation of all British lighthouses has resulted in there no longer being lighthouse keepers to monitor the situation and report bird, sea mammal, insect and bat movements.

A Natural History of Lighthouses highlights the contribution made by lighthouse keepers over the last century or two to the study of natural history, and ornithology in particular. Much of this is discussed in the words of the keepers themselves, set in the context of lighthouse history. Scotland has an especially rich lighthouse tradition, mainly due to a dynasty of Stevenson engineers covering over a century, all of whom also had a profound understanding of weather and geology – and indeed natural history – so important in the placing of their lighthouses.

Several redundant lighthouse buildings still function as bird observatories as well as wildlife viewpoints and study centres, museums, hotels, restaurants and private homes. The lanterns themselves are still maintained in this digital and satellite age, monitored remotely from a strategic control centre.

This beautiful and liberally illustrated book will be of huge appeal to ornithologists, pharologists, everyone with an interest in the natural world, maritime history and who enjoys an informative read.

‘This book highlights the contribution made by lighthouse keepers to the study of natural history, and ornithology in particular’. The Geographer

'...Through exhaustive research of old newspapers and other sources, he has tracked down many extraordinary contemporary eye-witness accounts - not just about birds, butterflies and other creatures that evidently arrive even at the remotest rock lighthouses, but also about the strange and often dangerous lives of their human occupants'. Grimsby News blog

‘...a collection of great stories about the life of the keepers, as well as references to the work of lightships and their crew. ...there are plenty of marvellous stories here. This well-produced book also contains some terrific photography...’ Nautilus Telegraph

'...Over 290 pages of text and stunning illustrations, author John A. Love explores the history of scores of UK lighthouses, those who designed them and those brave and resilient souls who worked in them, often at great risk to limb and life. ...he also chronicles how they have become habitats for an extraordinary wealth of wildlife, especially birds...' The Wryneck blog

‘In his wonderful book John A. Love depicts for us the historical past life of lighthouses located along the shores of Great Britain’. L’ornithologue

‘...an in-depth look at lightkeepers and their contributions to the study of natural history. ...a valuable account of those keepers who kept detailed records of bird sightings, weather, and other natural phenomena’. The Lightkeeper

‘The author writes from a wealth of experience and the book is profusely illustrated. …avery readable work, interspersed with many anecdotes. I can recommend this book, especially if, like me, you have a penchant for visiting lighthouses’. Scottish Birds

‘…if you want a comprehensive history of the lighthouses around the British Isles then this book is most assuredly for you as it covers them all in great detail and is crammed with everything from construction through to mystery disappearances. … It will … pique many people’s interest and the photos alone will get you turning the pages’. Fatbirder

‘…John A Love’s impressive account ... ventures far more deeply than any other into the natural environment of the extreme locations where lighthouses are often placed… The whole book is amply illustrated with excellent photographs which may induce the more adventurous reader to explore these bastions of dedicated service to our nation…’ The Northern Times

‘The author relates many interesting tales… It has a wealth of good quality photographs, mostly modern. …but also some historic photos in black and white. If you enjoy visiting islands and the remoter parts of the British Isles then you will find much to interest you in this book’. BTO News

‘…an in-depth look at lightkeepers and their contributions to the study of natural history. …a valuable account of the role of lightkeepers in recording bird movements, and the keepers’ keen interest in the wider natural world around them’. The Lightkeeper

‘It is a portfolio of the author’s excellent photography both of the wildlife encountered and the beautiful lighthouses. Accompanying the illustrations is well written narrative that holds the reader’s attention and provides a wealth of information. A great read’. Sea Breezes

'A fascinating account by any comparison and it all goes to reveal a new approach to lighthouses and their keepers. This is one of the author's very best books'. Highland News, North Star and Lochaber News

‘What a fantastic book!  I have always had an interest in our lighthouses but this book has moved my interest up another rung. And that is without consideration of the wildlife associated with lighthouses. … It is certainly one I would recommend, especially to readers interested in maritime safety and bird migration’. Wildlife Detective, The Blog of Alan Stewart
Click here to see the full review

‘John A Love’s book is a beautifully illustrated volume that celebrates the people and the animals and birds associated with these lonely outposts of our shores’. Bridgwater Mercury
Click here to see the full review

‘This impressive lavishly-illustrated book provides a real eye-opener about how nature finds a habitat on or around such small structures... a most authoritative and absorbing text... This is a great book - written with pace and verve - and one to return to again and again. You can almost smell the salt air as you turn every page!' ***** review on Amazon