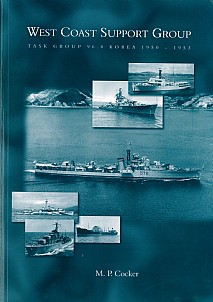 This illustrated portfolio is produced upon the 50th anniversary of cessation of hostilities and as a remembrance of the ships of Task Group 96.8. Through extensive research the author has gleaned information about the multi-national force, including numerous photographs. Ships of the Royal Navy, Royal Australian Navy, Royal Canadian Navy, Royal New Zealand Navy, Royal Netherlands Navy, Royal Thai Navy and the Republic of Colombia Navy all served in the West Coast Support Group known as Task Group 96.8 with the authority and resolution of the Security Council of the United Nations. That so many nations rallied to the cause was proof of the worth of that newly-formed organisation. Britain and the older nations of the Commonwealth rapidly legislated for their reserves to be mobilised, and so largely from Europe and the West came those who would assist the USA to liberate the Republic of South Korea from the aggression of its northern neighbour. Many ships had fought in World War II with the most recent combatant being HMS Amethyst, whose ship's company, and also that of HMSs London and Concord, suffered fatalities and wounds.

Technical details, operations in the Korean theatre and photographs of almost 100 vessels in the Task Group

This profusely illustrated book will be of great significance to those interested in modern history and maritime warfare. There is a great deal of historical detail which is complemented by many photographs of the fighting ships and auxiliary vessels involved in the conflict.

'Naval historian Maurice Cocker has produced a valuable 'portfolio' detailing the ships of the Royal Navy, Commonwealth and allied forces - excluding the United States Navy (USN) - that served during the Korean War. ... Having set the scene, Maurice Cocker systematically details the ships, often with thumb-nail sketches of their exploits. ...Headquarters ships, hospital ships, the Royal Fleet Auxiliary and the Mercantile Fleet Auxiliary are not forgotten and are superbly illustrated. ... In all, West Coast Support Group provides a valuable source of data on naval power during the Korean War. The appendices include explanations of the structure and terminology of 'task forces' and the dates in the theatre for HM ships. ...' Morning Calm

'The author, an acknowledged authority on naval vessels, has after considerable research presented an account of the service of each vessel involved in the war to coincide with the 50th anniversary of cessation of hostilities. Basic data including a photograph whenever possible of each ship and an historical account of activities brings to life the commitment and dedication of the personnel involved. He has taken great pains to include the ships of the Royal Fleet Auxiliary and the Mercantile Fleet Auxiliary, without whom the warships could not have met their commitments. ... 'It is a well-constructed account leaving the reader with a fair picture of the strategic and tactical background as well as a feel for an era of technology and a form of naval warfare which has nearly but not quite gone for ever. ... A book worth its place on the bookshelf'. The Nautical Magazine