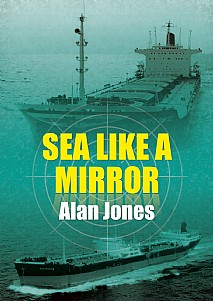 Living with the sea evokes a need to write about it, whether in poems, songs or prose. This book records a life spent upon the sea, from junior cadet to captain, and some of the reflections which at lonely times in the ocean's vastness seemed to have sprung from its depth.

At first attracted by the escape from grammar school and the lure of visiting places with exotic names and wearing a rakish cap and a jacket with brass buttons, it soon became apparent that the young cadet was no swashbuckler and would take some time to come to terms with the sea.

But come to terms with it he did, albeit in a love/hate relationship, in which love ultimately won out. This seafaring story encompassing the mundane and the exotic and relates how this mariner achieved his ultimate goal - being master of his own ship.

This well-written book will be of great interest to those who enjoy maritime and modern history, ship enthusiasts or anyone simply looking for a good read.

'Alan Jones is a natural-born storyteller. His memoir reads as smoothly as a good novel and holds the reader's interest with the same appeal. ... can be enjoyed alike by scholars, seafarers, maritime enthusiasts, ...an interesting story.' International Journal of Maritime History

'Captain Alan Jones...manages to combine good writing with good stories. Written with a good turn of phrase, well observed descriptions and peppered with photographs of some ships and some characters he worked with, Capt. Jones has done a good job in capturing life at sea in the latter half of the 20th century.' NUMAST Telegraph

'...is as enjoyable an autobiography as i have ever had the pleasure to read. One for your collection.' Sea Breezes