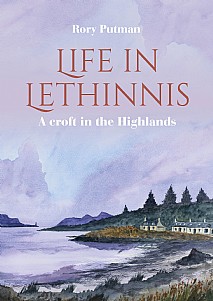 A croft in the Highlands

After 20 years working as a professional biologist, the author decided to ‘retire’ to the Highlands, moving with his wife to a croft at the edge of a small and somewhat inaccessible village on the west coast. This was no romantic and idealistic aspiration for the Good Life, nor really an attempt to ‘get away from it all’; rather a growing disaffection with living in the overpopulated south of England and a desire to return to his Scottish roots. Moving was like stepping back 50 years in time: most of the other residents of this tiny hamlet had been born and bred there, the majority were Gaelic-speaking and, with few of the conventional ‘services’, there was a strong sense of community that had been missed.

This engaging story gives a collection of cameos from those first few years as they moved into and settled in their remote smallholding. It is developed as a series of short 'anecdotes' about life in this isolated west-coast Scottish community. Actual anecdotes are interwoven with snippets of natural history observation related to various topical wildlife issues.

In the tradition of Lillian Beckwith’s The Hills is Lonely, the stories revolve around the strong characters who made up this isolated community and became part of their everyday life. All the people and events described in this book are real, although places and names may have been changed. Enough clues remain that professional biologists or those with a keen interest in natural history will readily identify the peninsula.

It is a joy to read and reveals Highland life with all its humour and character.

This will appeal to anyone with an interest in the Scottish Highlands, who has ever considered a change of lifestyle and enjoys a good story.

“Many thanks for your prompt and courteous service. I have bookmarked your website for future use. ”
George, UK
“The book safely landed on my desk this morning – thanks very much for swift delivery. ”
Pawel, UK
“Many thanks for speedy dispatch. ”
Camilla, Ireland
Dunbeath, Caithness, Scotland KW6 6EG, UK T: +44(0)1593 731 333 E: info@whittlespublishing.com