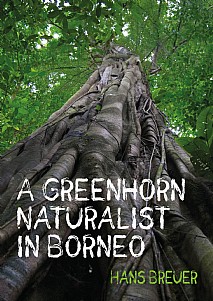 A Greenhorn Naturalist in Borneo

‘…Whether savouring Hans’ great storytelling from the comforts of an armchair or in the midst of planning their own adventure to Borneo, I am confident that readers will not only be entertained but also inspired to look deeper into the true value of these irreplaceable rainforests’. Extract from Foreword by Chien Lee, Honorary Research Fellow, Institute of Biodiversity and Environmental Conservation, Universiti Malaysia Sarawak

A Greenhorn Naturalist in Borneo is about natural history, travel in the tropics, life sciences, and adventure, with the environment always in mind. It chronicles the nine years the author spent with his family on that equatorial island. The book’s humorous style never detracts from the focus on the science, the island of Borneo and its natural wonders.

The story begins in 2007 on top of a garage in Taiwan, where the author kept a greenhouse filled with hundreds of carnivorous tropical pitcher plants. In August of the same year, he attended a conference on these plants in Borneo and met them in the wild for the first time. This triggered an obsession with the island’s legendary rainforest fauna and flora, and he decided to move to Borneo with his family for easier access to the jungle. In a tone reminiscent of Bill Bryson, Douglas Adams, and Gerald Durrell – funny, self-deprecating, but always satisfying for the science-minded reader – A Greenhorn Naturalist in Borneo documents the Breuer family's adventures with Borneo’s enormous biodiversity: flying snakes, venomous primates, parachuting frogs, pangolins, king cobras, orangutans, masters of mimicry and camouflage, the world's rarest lizard and the world’s longest snake.

And these are just a fraction of the life forms the reader will meet. Adventure lurks behind every trail bend: toddler-sized monkeys terrorize night hikers, bearded jungle pigs hunt stray dogs, a giant python almost gets stepped on, and other encounters of the ‘not so funny when it happened’ kind. The reader will also meet the people inhabiting the island, such as Asia’s last rainforest nomads, quaint government officials, and former headhunting tribes that still proudly display their trophies above their fireplaces. Inevitably, the author’s life in Borneo also led to first-hand insight into the island’s environmental tragedy caused by decades of severe over-exploitation, a recurring topic throughout the book.

A Greenhorn Naturalist in Borneo puts the reader in a front-row seat to marvel at nature’s wonders in all their magnificence visiting places unknown and creatures unheard of; and it is also an invitation to consider the state of the planet, to take it seriously, and to act before it’s too late.

This will be of immense appeal to everyone with an interest in the natural world, wildlife, conservation, Borneo in particular and anyone who enjoys an entertaining read.