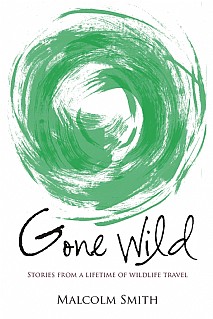 Stories from a Lifetime of Wildlife Travel

Often amusing, sometimes romantic or fraught with danger, these 30 short stories are about local people, spectacular places and the special wildlife the author sets out to find. The stories include seeking out Arabian Oryx on the searing plains of the Saudi desert; eiderdown collecting in Iceland, crouching in swirling clouds and darkness on a knife-edge ridge in the rugged Madeiran mountains and swimming with Grey Seals off the Pembroke coast.

The author describes incredible encounters with spectacular animals from lumbering manatees and dangerous rhinos to unforgettable experiences such as being led by a honeyguide with a Kenyan Dorobo tribesman to the nest of wild bees and watching cranes tip-toeing their courtship dances. He also attended a Parsi funeral where the corpses are no longer consumed by vultures; experienced a close encounter with armed Omani police, bluffed his way on to the largest refuse tip in southern Asia and canoed along Mali’s Niger River watching black and yellow ‘bishops’ displaying along its banks. These are just a few of the remarkable experiences recounted by Malcolm in a lifetime searching out some of the most interesting, and some of the rarest, animals on earth.

These hugely entertaining tales visit places as diverse as the Florida Everglades, England’s New Forest, Iceland’s offshore islands, the Empty Quarter of the Saudi Desert, the tiny remnants of the Jordan’s Azraq wetland and the impressive oak dehesas of Extremadura. Sit back and visit the world!

This will be of immense appeal to everyone with an interest in nature, wildlife, conservation and travel and who enjoys an entertaining read.

‘...as his latest book describes, he’s had scary moments, as well as awe-inspired ones! Visits to the New Forest, Iceland’s offshore islands and countless wonderful corners of our planet have left Malcolm at times inspired, overawed and joyous...’ The Sunday Post (read full review)

‘...What a fascinating book. ...describes his adventures (and misadventures) in a variety of far flung places as diverse as the Saudi Desert and the Niger River... The stories are beautifully told and demonstrate not only an incredible knowledge of wildlife world-wide but of the influence, good or bad, of humans on some species and their habitat. ... Gone Wild is a world tour for wildlife enthusiasts and is a book I would thoroughly recommend’. Wildlife Detective, The blog of Alan Stewart (read full review)