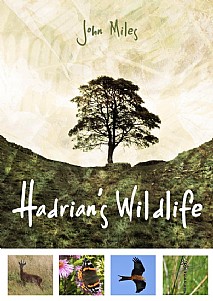 Built in the years AD122-30 by order of the Emperor Hadrian ‘to separate Romans from Barbarians’, Hadrian's Wall was 73 miles long, running from Wallsend-on-Tyne to Bowness on the Solway Firth. It was originally almost 5 metres high with 16 large forts along its length and is the largest Ancient Monument in northern Europe.

Following the author’s previous successful book, Hadrian’s Wildlife has been enriched and expanded with additional information on wildlife and Roman history. When standing on the WHO site of Hadrian’s Wall, many visitors may wonder what the area would have looked like during Roman times. Bringing the bird remains from Roman digs into view reveals which species were living then as well as what the landscape looked like. Although some species such as White-tailed Eagle and Common Crane are no longer found here, others including Nuthatch, Hobby and Little Egret have colonized the area.

Living close to Hadrian’s Wall, the author has explored its many habitats from the Solway Firth across to the east coast. Many of these wildlife sites have a Roman influence from old forts to the gathering of pearls from the oysters that are found on the North Tyne.

Hadrian’s Wildlife will encourage visitors to the area to enjoy and appreciate the wide selection of these habitats on a year-round basis. This invaluable guide to the many and varied attractions of the area will take the reader on a voyage of discovery and will be an essential companion for visitors.

Introduction
History of the birds
The Solway Estuary
The Solway Mosses
The Solway Marshes
The river course; Silvanus – god of the forest
Geltsdale
Birdoswald and up the Irthing
The heather moorland
The crags
The loughs
Chollerford Bean Field
Kielder; Down the Tyne
Kittiwake City
Hadrian’s Kite project
Thomas Bewick
A monthly guide around the Wall
List of bird species found in Roman times
References and further reading
Bibliography
Index

An invaluable guide for visitors to the area, so that they enjoy and appreciate all that the area has to offer.

'...this is a painstakingly-researched account of one of Britain's most important World Heritage sites. A month by month look at what wildlife can be found, and where, is a nice touch for those who'd like to dip in to sections of the wall at different times of the year.' Scotland Outdoors To see the full review click here

‘…Hadrian’s Wildlife presents as a guide book to the complex landscapes, social and natural history of a narrow strip of country. … Hadrian’s Wildlife is well illustrated with drawings by Mike Henry and many excellent photographs. But do enjoy the text…’ ECOS

‘Using a winning combination of history and anecdote, John talks about nature on the Romans’ most Northern Frontier… …the result is an absorbing read for anyoneinterested in local history. … What will make this book appeal to the general public is his broad brush approach – he delights in presenting the bigger picture – and what emerges is a strong sense of history and place.’ Hexham Courant

‘…Hadrian’s Wildlife is packed with beautiful artwork and photographs of wildlife and scenes from the topic area. … There is a wealth of fascinating information in the pages of this book. … If you have an interest in history, wildlife and conservation; this is a must have publication. Reading this book has given me a far better understanding of the history of the area I live in…’ The Inked Naturalist

‘Hadrian’s Wildlife by John Miles, whose past work includes Hadrian’s Birds, looks like the perfect companion for walkers and visitors to this part of Northumberland. The book details the wildlife and flowers that can be seen throughout the changing seasons while surveying 2,000 years of history and nature. …In this way John… adds snippets of human interest to the wealth of bird life he features.’ The Journal

‘...an intriguing insight into the wildlife known to have been present in the area in Roman times thanks to evidence uncovered in archaeological digs. ... Detailed information is given about the wildlife to be seen today on crags, loughs and heather moorland in the vicinity of the Wall, and the book also provides a monthly guide to wildlife to look out for...’ The Northumbrian

‘...Adding a new dimension to the famous story ... John Miles’ new guidebook offers a delightful blend of the Wall’s historical context, expertly intertwined with a rich background of the living landscape it cuts through.  ...paints a vivid picture of the surrounding wildlife set against an epic historical backdrop ... the book is the ideal companion for visitors seeking an enriched experience of the Wall as they walk or cycle its length’. Living North

'...will make a grand accompaniment to the exploration of the lands surrounding the enigmatic Hadrian's Wall. ...you are expertly guided by insight and anecdote through the wildlife, habitats and history of this truly evocative land. ...he describes in great detail what will be encountered on your perambulations along the route of the Wall'. BTO News