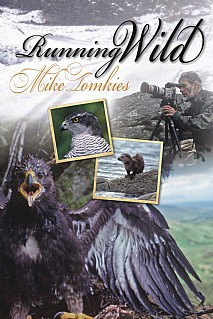 You thought he was retired, even dead? No, he is back! At the age of 86, Mike Tomkies is back doing what he does best – observing our rarest and most dramatic wildlife, unsuspected and from close quarters, and writing about it with the kind of intimate detail that has earned high acclaim from critics and conservationists.

Within days of arriving back from five years of studying bears, wolves and lynxes in Spain, he is up a wild cliff in Cornwall watching three peregrine falcon chicks from hatching to flying stage. We can follow his astounding adventures over the next ten years as he obsessively searches all through Britain for that elusive ‘small wild paradise’ so many of us would also like to find. He lives in, but finally loses, no less than six new homes in that time and the complications and reasons why are both hilarious and sad. Even more fascinating is his continual obsessive quest to get up close and personal with nesting goshawks, buzzards and ospreys, as well as mammals like fishing otters, a fox family and he even feeds wild badgers by hand.

At one remote farmhouse in the Borders, he learns how to handle a bulldozer, digs out his own 70-yard lake and stocks it with trout. Over three years there he raises ten barn owl chicks and establishes three breeding pairs in areas where they had long been absent. It was the most successful barn owl release at the time. There are many amusing anecdotes such as when he dreaded taking some of Prince Harry’s classmates to ‘otter bay’ and then saw far more otters than when he had gone there on his own!

Transcending all are his new studies and descriptions of hunting and nesting golden eagles, during which he passed his 3,050th hour in one of his home-made ‘invisible’ hides, and a huge female allowed him to bring much-needed meat to her chicks in their eyrie. The book ends with triumphant filming of the magnificent white-tailed sea eagles on Mull, hunting and sailing into their high nest with prey and feeding their chicks. Mike also achieved valuable publicity for the pioneering public sea eagle hide project on Mull.

This is a real must for anyone interested in wild nature, and the profound experiences of a leading naturalist with rare major species. It will also be a magnet for all Mike Tomkies’ loyal fans.

'...describes more adventures of Mike Tomkies in his quest to film wildlife, particularly birds. It also contains some quite awe-inspiring descriptions of filming Golden Eagles in their nests and the triumphant filming of the White-tailed Eagles on Mull'. Scottish Birds

'Mike 's style has an attractively timeless quality... ...it will certainly appeal to his army of enthusiastic readers, while others less familiar with his earlier works will find an entracing picture of aspects of wildlife conservation in the UK today, as seen through the eyes of someone who lives much closer to his subject than most of us will ever manage'. Undiscovered Scotland

'...is a tremendous book by a naturalist with many decades of first-hand experience of wildlife. In particular, the author must be as knowledgeable on the ways of the golden eagle as anyone in the UK. ... The author is a master of detail and description... Running Wild is a must for anyone with an interest in wildlife, especially in birds of prey. I have read the books of many nature writers, but Mike Tomkies has truly lived alongside his subject'. Wildlife Detective, The blog of Alan Stewart

'Interwined with his tales of seeking eagle eyries in our wildest placesare the detailed accounts of seeking out-of-the-way locations to call home... an entertaining read... Mike's stories are underpinned by his upbeat enthusiasm for his subject, and who could fail to crack a smile at his love affair with 'Camballo' his camper van.' Bird Guides

'...there are no less than 25 chapters in this current book but each have titles that capture the mind and makes you want to delve further into the author's inner thoughts. ...it his enthusiasm that comes over whatever he is doing from the commonplace to the heart-stopping... The author has the ability to express what is in his mind in a way that very few other authors share. ... This is a must for your bookshelves as it will really inspire you. Promise! ... The author, and Whittles Publishing, are to be congratulated on this latest addition.' Ray Collier, Highland News Group

'He continues to do what drives him, engaging in a lifelong journay to observe and record our rarest and most dramatic wildlife. Here is a natural adventurer undertaking an obsessive search for that elusive 'small wild paradise'. He recounts what he sees, photographs and films from six homes and several hides. These include a 3,050-hour stint watching for golden eagles and the successful filming of the white-tailed sea eagles on Mull. ...they are certainly part of a long and memorable journey.' Scottish Island Explorer

'This, his latest in his series of autobiographical and wilderness classics, is as fast paced and breathtaking and has as many twists and turns as the best fictional thrillers. ... The detailed account of obtaining the chicks from a wildlife centre in Devon, building a home for them, rearing and feeding them, all the time ensuring they remain wild and do not become domesticated is one of my favourite parts of the book. This is one of those rare works of serious wildlife exploration and observation that deserves the accolade of being truly a page turner'. Am Bratach

'…a delightful book for the friends of wild nature.' Luonnon Tutkija