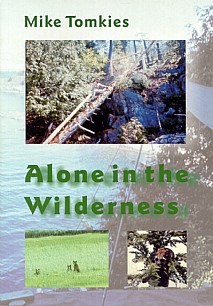 Alone in the Wilderness

This is the story of a man who achieved what thousands only dream of. He shed the pressures of urban life as an international journalist and exchanged it for solitude, self-sufficiency and new purpose. He emigrated to Canada, found a plot of rock, trees and cliffs in a remote part of the British Columbian coastline, and moved in with typewriter, tent and the barest necessities to build his dream cabin.

How he eventually built his log cabin, learned to live off the sea, adjusted to and worked with the hardest taskmaster of all - Nature - fought loneliness and was inevitably drawn to greater understanding of his remote wilderness and its wild creatures, is an inspiring story. His adventures with nesting bald eagles, a cheeky raccoon, grizzlies, a lame seagull, killer whales and other creatures, are as informative as they are enthralling. Three extraordinary characters enhanced his experiences: Ed Louette, a skilled backwoods carpenter; Pappy Tihoni, a Scots-Indian who guided him on his most dangerous but fulfilling expedition into the mountains and wild dog Booto, who scratched at his cabin door with wagging tail when loneliness threatened to overwhelm.

This book is as compelling and perhaps even more relevant today with the world's great wilderness areas continuing to disappear.

A 'must' for fans of nature writing in general and Mike Tomkies in particular.

‘...A compelling story... Wonderfully written, it is as entertaining as any novel’. Yorkshire Post

‘...a fascinating story of self-sufficiency and a personal search for purpose in the majestic wilds of British Columbia’. Writers’ News

‘Tomkies is to be congratulated on a splendid book. His feelings for people, animals, wilderness are expressed honestly and beautifully. His descriptions of nature are sensitive as well as accurate... I enjoyed it thoroughly...’ Dr. Victor H. Cahalane, distinguished zoologist and former Deputy Director, New York State Museum

‘...accomplishments compel admiration ... the life it portrays, the nerve and daring it reveals, can only inspire in most of us ... feelings of respect and envy’. Natural History Museum, New York