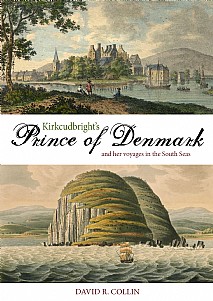 and her voyages in the South Seas

This is the story of the unusually long and interesting career of a small Scottish schooner spent primarily in the southern hemisphere. From the quest to trace her history and construction to the careers of those who owned and sailed in her during her 74-year life, the story is full of vividly-portrayed rogues and heroes – the famous and infamous – as well as ordinary people calmly going about their daily business in tempestuous and difficult times, when grave risks were stoically and courageously accepted as a matter of course.

Visionary colonists, whalers, sealers, Maoris, botanists, missionaries, cannibals, convicts, aristocrats, explorers and seamen of many nationalities are linked in this narrative and biographical sketches of key figures are brought to life with detailed information transcribed from logs, crew and passenger lists. As well as a dramatic rescue by the ship’s captain and crew, the schooner’s log covers numerous voyages including whaling to New Zealand and trade with Samoa.

Built in Kirkcudbright, Scotland in 1789 she was wrecked in the Chesterfield Islands, Pacific Ocean in 1863. Her incredible rebirth only four months later as the schooner, Hamlet’s Ghost is verified by painstaking and meticulous research into records and logs of the vessels concerned.

The voyages of the Prince of Denmark and of Hamlet’s Ghost exemplify the courage, skill and vision of men and women who experienced hardship, danger and adversity in their quest for riches in colonial lands.

An Old Caledonian Beginning; Following in the Wake
A Colonial Venture; Merchants, Mystery, Missionaries and Maoris
A Curious and Rich Old Fellow
The Ship’s Logs
The Whale Trade; Below Decks
The Isles of the Navigators
Kelly’s Boom Years
The End of Shore Whaling
A Troubled Voyage
Planks, Palings and Petty Crime
A Chinese Banquet
From Sea-slugs to Sperm Whales
A New Caledonian Ending
A Ghostly Rising
Epilogue
Sources
Glossary
Appendices
Index

This fascinating story will interest historians, social historians, genealogists and anyone who enjoys an engrossing read.

‘…is a great achievement…the fascinating reconstruction of the 75 years of maritime service of this vessel… David Collin has…successfully brought the Prince of Denmark back to life, telling its story with passion and an insightful eye. …he deserves high praise, and I commend the work to the bookshelf of all who relish a good narrative and a fascinating tale’. The Great Circle

'This is an absorbing book that would be enjoyed by genealogists and social historians of the 19th century as well as readers of general history... David Collin has without a doubt written a masterclass in original maritime research'. History Scotland

'...documents the story of how small Scottish schooner Prince of Denmark contributed to the development of the sustainability of the Australian and New Zealand economies. It is a detailed and immaculately researched piece of work... ...a fascinating insight into how the extraordinary skill of the Scottish shipbuilders combined to produce a reowned and respected ship that became vital for trade across the Southern Hemisphere. ...you'll definitely enjoy this book.' The Lifeboat

'An incredible account of a single ship. ... During her 74 years afloat under her original name, this ship encountered; Colonists, whalers, sealers, Maoris, botanists, missionaries, cannibals, convicts, aristocrats, explorers and seamen - with each encounter being worthy of a book (film even) in its own right. ...I would recommend the book because, just as soon as you start reading, you will find it hard to put down. ...an excellent example of research resulting in the most intriguing tale of a vessel from yesterday I have ever read'. Ned Middleton

'Collin's richly illustrated and meticulously researched book tells the story of this remarkable ship... Among the rich cast of characters to come in contact with her were missionaries, prominent politicians, explorers, naturalists, ex-convicts and fraudsters. ...uses excerpts from their detailed logs to paint a vivid picture of life aboard'. Dumfries & Galloway Life

'...is a truly remarkable book. ... If ever a book deserved to be called a labour of love, then this is it. The result is extensive referencing of original material such as personal and business correspondence, press reports and the ship's own logs. ... The author gives as much attention to the many men who owned, captained and crewed the Prince of Denmark as he does to the ship herself, and the effect is to bring vividly to life a period in our colonial past which is far less well known than it deserves to be'. Undiscovered Scotland To read the full review click here