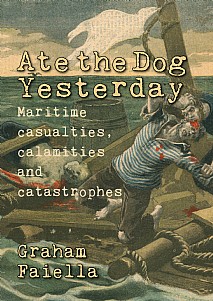 The constant dangers that deep-sea sailing ships and sailors of the late 19th century and early 20th centuries faced were numerous and this book recounts the true-life dramas of their perils and misfortunes – the battles that they waged, and all too often lost – against the hazards of the sea.

Life was tough for 19th century sailors in sail – shipboard work was hard and routinely dangerous. Crew members were frequently maimed or even killed by the sea, or by any number of dangers they faced while working their ships. It was the same for crews in all merchant sailing ships of that time: sailors bore the extraordinary hardships as nothing more nor less than their duty to obey their captains and drive their ships to a safe port to discharge or take on cargoes.

Great disasters from around the world are featured including the Sir John Lawrence: loss of all crew and 730 pilgrims; the Oncle Joseph and the ‘Damned Ship’ Ortigia; the Princess Alice and Bywell Castle collision: tragedy on the Thames; the Camorta sunk in Bay of Bengal cyclone with 739 dead; the sinking of the Utopia at Gibraltar with over 500 lives lost; the Mohegan wrecked on the Manacles and the loss of the Stella in the Channel Islands when 112 people lost their lives.

From remarkable voyages, mutinies, hoaxes, curiosities and disease, to Cape Horn passages, collisions and castaways, this book has a fund of amazing tales that will engross the reader.

These compelling stories will be of huge appeal to maritime historians, sailors, whether retired, current or armchair, and anyone with an interest in the sea and tales of adventure.

‘…is part drama but all factual record of those years when shipwreck was commonplace, taken mainly from the Casualty columns of Lloyd’s list newspaper. Great disasters…are reported, plus many others, in this weighty book; hours of discovery await the armchair sailor or maritime historian. There is treasure here…’ Dog Watch

‘...vividly transport the reader onto a wildly pitching deck or below where one’s stomach churns in a dank, dark, cramped cabin – tales of the sea where slavery and piracy flourished......present unexpected informative and entertaining nuggets of maritime lore’. The Northern Mariner/Le marin du nord

‘I would highly recommend this book to our readers’. Shipping Today and Yesterday

‘...provide an eye-watering record of stranding, injury, mutiny, disease, murder, disaster and various other calamities from the heyday of deep-sea commercial sail. ...also provides a few interesting snapshots into the day-to-day life of sailors, including what they ate and what they encountered on reaching their exotic destinations’. Lifeboat

‘…a pleasure to read, well written and truly captivating. … A perfect Christmas read for any who enjoys maritime tales of adventure’. Sea Breezes

‘This is a veritable treasure chest of, as the sub-title says, maritime casualties, calamities and catastrophes’. FLASH

‘…there will be much interest for you…the mix of black humour, harrowing witness accounts and tall tales is actually rather apt for a work on maritime culture and history’. Nautilus Telegraph

'If you're looking for dramatic seafaring yarns then Graham Faiella's book is stuffed full of them. ... Here are stories of shipwrecks, disease, bizarre accidents, pirates and of some remarkable survivals. ... This is a fascinating book to dip into and a helpful reference work for those who want a greater appreciation of the dangers our ancestors faced at sea.' Who Do You Think You Are