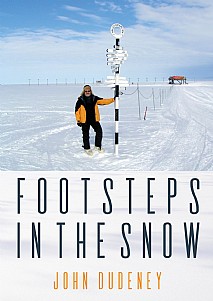 Footsteps in the Snow

Footsteps in the Snow recounts a life shaped and dominated by Antarctica, a multi-facetted account of a life dedicated to Antarctic science, policy and governance. It is also the story of growth from callow youth to Antarctic professional in the most challenging of environments.

Joining the British Antarctic Survey (BAS) straight from university in 1966 meant two years as a scientist at an isolated British research station with all the challenges of wintering in the hostile environment half a century ago. After just two years he became one of the youngest men to be made a base commander, and as Sir Vivian Fuchs (then Director of BAS) recounts ‘proved himself one of the best we ever had under the most testing conditions’. The story recounts the many challenges of those testing conditions, while developing scientific ideas and accomplishing engineering feats with his team and on occasion looking death in the face and surviving. There were new developments in building research stations on the ice shelf, and the discovery of the ozone hole that gripped the world.

Then followed the transition from research scientist to policy maker and diplomat when he became Deputy Director of BAS and advisor to the British delegation at the Antarctic Treaty. Tragedy struck at a base resulting in the author leading the first ever British midwinter flight into Antarctica. Since retiral, the author has become a polar historian “of repute”, and his efforts have been directed to writing and being a guide for Antarctic tourism.

This book allows the reader to feel the wonder, awe, excitement and passion for Antarctica which drove John Dudeney throughout his career, and which is as fresh today as it was on first encounter half a century ago.

This will be of great appeal to anyone interested in the Antarctic, polar exploration and science, and adventure

The Magnetism of Antarctica
John Knight