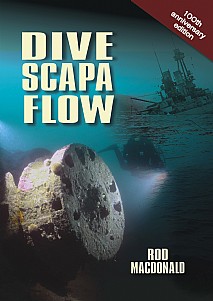 Dive Scapa Flow has been THE definitive guide to diving the fabled wrecks of Scapa Flow, one of the world’s greatest wreck diving locations.  This completely re-written and updated centenary edition is produced to coincide with the 100th anniversary of the scuttle of the 74 warships of the interned German High Seas Fleet at Scapa Flow on 21st June 1919 – the greatest act of maritime suicide the world has ever seen.

The dark depths of Scapa Flow conceal the remains of several of the Kaiser’s WWI High Seas Fleet. Three massive 575 feet long 26,000-ton König-class battleships await exploration – huge underwater mountains where divers can see the last 12-inch big guns to have fired at British warships at the Battle of Jutland in 1916; or drift along rows of 5.9-inch secondary battery casemate guns and see massive masts and heavily armoured spotting tops. Four 5,000-ton, 500 foot long, kleiner kreuzers, Brummer, Cöln, Dresden and Karlsruhe lie on their beam ends open for inspection with parts that remained on the seabed of many other High Seas Fleet vessels as they themselves were lifted to the surface during the greatest feat of underwater salvage that has ever taken place.

Add in a U-boat, a boom defence vessel, an Icelandic trawler, a number of drifters, WWII vessels, many ‘blockships’ intentionally sunk to block the smaller channels into Scapa Flow during WWI and WWII and it becomes apparent what Scapa Flow offers divers.

Scapa Flow’s war graves, HMS Royal Oak, torpedoed at the beginning of WWII and HMS Vanguard, which blew up in a catastrophic magazine explosion in 1917 and HMS Hampshire, which struck a German mine and sunk on 5th June 1916 north-west of Orkney carrying Lord Kitchener and his staff on a secret diplomatic mission to Russia, are off limits to divers today – but their stories are recounted to preserve the memory of those that perished.

This indispensable guide is a must for any diver interested in shipwrecks and will also appeal to all those with an interest in maritime and naval history.

‘This is an outstanding book and I would recommend it’. Shipping Today & Yesterday

‘The photos and detailed wreck sketches definitely get the adrenalin and imagination going. …I was drawn into a gripping and almost eerie world where one of the largest scuttle of German warships in history had occurred.  …was pleasantly taken aback by the rich history that the book clearly provided. It is well presented and structured to anyone who would want to dive this part of the world or find out about its rich and hidden history’. Little Ship

‘...this is a far more comprehensive book. The most notable addition to this edition is the illustrations. The historic pictures of the ships taken at the time give a tremendous sense of their power... ...this most enjoyable book’. Scottish Diver

‘One book that ardent wreck and Scapa Flow fans ought to grab is Rod Macdonald’s ‘Dive Scapa Flow’. Macdonald’s knowledge comes across in his enthusiastic writing. The prose is clear, definitive and loaded with facts, figures and safety information. ...the ideal book to read just before you dive on the wrecks’. Deeper Blue

‘...having read Rod Macdonald’s latest publication “The 100th anniversary edition” ...a compelling read. Rod’s description of the dive scene once you get to Scapa Flow is compelling and every divers dream scene, It’s a beautiful, informative book and a must have for any divers bookshelf’. SubSea

‘Rod Macdonald writes with clarity and enthusiasm...there is no question that this is the definitive account. The book is loaded with facts and figures... Anyone wanting a dive adventure at the fabled Scapa Flow, or just with an interest in shipwrecks, surely needs this book’. Dive New Zealand | Dive Pacific

‘This indispensable softback guide, at almost 400 pages in length, is a must for any diver interested in shipwrecks, and will also appeal to all those with an interest in maritime and naval history’. The Orcadian

‘Rod’s definitive guidebook...has been thoroughly revised and reimagined for a new generation of divers... The trademark illustrations remain, supplemented by sonar pictures and some fabulous new photographs... As with his Palau and Truk books, there’s plenty here for fans of military history to get excited over... His knowledge, findings and eyewitness account from the deep, remote location off Orkney make up a fascinating last chapter of the book. ...all of the elements make the centenary edition a must-read for anyone thinking of diving the wrecks of Scapa Flow’. British Diver Click here to read the full review

‘...I found this book fascinating and informative. Although primarily a guide for those interested in diving...it is much more than that. The book covers military history, naval history, biographies, the economics and history of salvaging wrecks, engineering, tourist information and much more... ...detailed accounts of the location of each of the wrecks and the best means of getting the most out of diving to view them. Essential safety information is also included. ...he [Rod] is also an accomplished writer who is capable of explaining technical details in ways accessible to the general reader’. Am Bratach

‘The book is a replete with some excellent photographs and drawings. They are first rate and...enable the reader to understand what it is that attracts all those divers – and there are many of them – to Scapa Flow’. Workboat World

‘This is a classic dive book updated and revised, and a fitting tribute to the memory of all those who perished in that body of water’. Julian Stockwin

‘...gives an insight into what is on offer under the water’. Burnley Express, Rebecca Hay

‘No...wreck-diver...should be without this book... Many books have been written about Britain’s world-class wreck-diving attraction. ...but Macdonald’s caught divers’ imagination not only for its vivid meshing of history with diving narrative, at which he is a master, but for its illustrations. ...this new version...benefits in particular from the latest generation of sonar scans, which reveal exactly how the wrecks appear today. The book has almost doubled in pagination since its original incarnation, but what is impressive is that much of the new edition has been rewritten rather than simply tacking new sections onto old’. Divernet Click here to read the full review

‘...a superb book. The text is sufficiently detailed to be considered an “everything you ever wanted to know about...”, and this is supported by excellent illustrations. This book is required reading for anyone interested in diving, or in Orkney (or both), and guarantees that the definitive guide to diving Scapa Flow will remain exactly that for many years to come’. Undiscovered Scotland read full review here