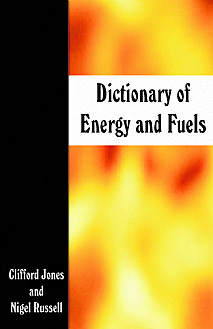 Dictionary of Energy and Fuels

This comprehensive new dictionary comprises over 1300 definitions and brief articles to provide an extremely useful ready-reference work on solid, liquid and gaseous fuels, including information on the scenes of production of many fuels, such as major coal reserves and large oil and gas fields.
Economics are addressed with entries included for all the major indices for oil, coal and natural gas pricing. The political perspective is also dealt with, covering the oil-producing countries and OPEC; environmental issues also feature, as do entries on chemical compounds, trade names, industrial processes and much more.

The book carefully traces fuel usage since industrialisation with information provided on some 19th century events such as the Drake well. However, there is a correct balance of entries in terms of the periods to which they relate and thoroughly modern topics such as enhanced oil recovery are featured. Users of the Dictionary will gain an appreciation of the development of fuel and energy technology and sense the continuity or, in some cases, revival of ideas. As an example, what is now known as 'BTU conversion' and often treated as if it were novel is, in fact, a return to gasification technologies that were used a century or more ago!

The Dictionary of Energy and Fuels is a reliable reference work on fuel and energy which will remain of great usefulness despite any future changes and trends in related technologies.


This easy-to-use dictionary will be of great value to undergraduates, postgraduates and professionals in fuel technology, industrial chemistry, chemical and mechanical engineering and whenever a ready-reference on energy and fuels is required.

'... a staggeringly wide range of definitions is on offer... a list of some fifty references, a table of fuel-related units and conversion factors, and a selection of fuel and energy terms translated into languages other than English, round off the volume... a useful dictionary in a compact format... which should satisfy those requiring a one-stop shop of information on a wide range of matters relating to Fuel and Energy, be they at undergraduate, postgraduate or professional level'. Fuel

'... a compendium of useful information ... a broad spectrum of topics is included in this short but fact-filled volume. ... this book will serve as a very useful reference for those involved in the field of fuels.' Journal of Hazardous Materials