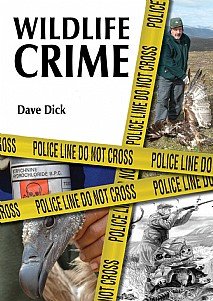 The Making of an Investigations Officer

‘This is an important book. It is written by an expert who probably knows more about wildlife crime in the UK, and especially in Scotland, than anyone else. It is important because so little is known and understood about a widespread and deeply disturbing illegal practice...’ Extract from Foreword by Sir John Lister-Kaye, OBE

Through the professional life of Dave Dick, the RSPB’s Senior Scottish Investigation Officer between 1984 and 2006, the often murky world of wildlife crime is revealed. This is the first book that faces up to the realities of the often unsuccessful efforts by the justice system in its attempt to stop these crimes. Unflinching accounts of the shocking levels of killing and the cruel and callous nature of the killers are related.

However black comedy and lighter moments prevent this being just another catalogue of man’s inhumanity to nature with personal accounts of the thrill and joy of watching some of our most beautiful birds and animals in their equally beautiful landscapes.

The author examines the motives of both criminals and their pursuers in an attempt to show the truth of what has become a highly-charged and politicised topic. He reveals the truth of what is happening in some corners of our countryside, where the public may be discouraged to tread and hopes to inform a more reasoned debate on the topic.

This timely and inevitably controversial book lifts the lid on the pressures faced by some of our most iconic wildlife species which are being shot, trapped and poisoned.


This hard-hitting book reveals what it is like, day-to-day, to be at the forefront of the battle to deal with wildlife crime and its perpetrators. It will be a gripping and informative read for anyone who holds our wildlife precious and is essential for those working in this sector.

'...a fascinating insight into the challenges faced by those whose job it is to stop wildlife crime'. Birding World

'Wildlife Crime is a no-nonsense memoir that weaves 25 years of battling criminals into gritty account of life on the frontline. ... His forensic accounts make sober, fascinating reading, and revelation is tinged with a hard-won, dry humour. ... Both hope that the book will "reignite the public debate and media coverage" of illegal bird-killing. Indeed, it must' BBC Wildlife

'Dave's experience in the investigation of raptor persecution is probably unparalleled... The book will be an eye-opener to most and is an essential read for those who care about what is happening in our countryside.' Legal Eagle

'...it gives an inside account of the author's career and battle to deal with wildlife crime and its perpetrators.' The Southern Reporter to see the full feature click here

'...a very personal account of what it was like to be in the forefront of the battle against this and other wildlife crime, the undercover operations he was involved with and the court proceedings and publicity that sometimes ensued. ...his passionate advocacy for wildlife and the way he highlights the issues of wildlife crime make this book a worthwhile read.' Peregrine

'...this is a lively read... ...With books on domestic UK wildlife crime more scarce even than successful convictions, Dave Dick has provided essential reading for anyone seeking to get off the 'vermin' encrusted fence and take a stand.' ECOS

'Written with a surprisingly light touch and a real dose of humanity, Dick's painfully honest account of the cruelty and callousness he encountered is an important contribution to the debate on how our countryside should be maintained and policed.' Scottish Field

'...this book is full of detailed information and at the same time very readable. Anyone who reads it will now have the full picture put into perspective and rightly so. ... Perhaps it is all summed up by the author's last sentence. "If we are to call ourselves a civilised country, then let's make proper use of the legislation that was so hard won in the first place, rather than go back to the destructive, ignorant and primitive practices of yesterday" A must read book' Highland News, North Star and Lochaber News

'...This is the first book that faces up to the realities of the often unsuccessful efforts by the justice system to stop these crimes.' The Scots Magazine

'...A fascinating read, especially for those passionate about saving our wonderful birds of prey.' Birds

'...Dave Dick - a scottish specialist in wildlife crime working with RSBP presents in his excellent book a new view to the human cruelty and fight against it. In very pleasent and entertaining style the author goes through his personal experience from a young man keen on music to an investigating officer and conservationist... ...his wonderful book...' For The Birds, Bulgarian Society for Protection of Birds

‘...You do gain a real sense that Dave’s passion has been instrumental towards raising the profile of wildlife crime in Scotland... The book will be an eye-opener to most and is an essential read for those who care about what is happening in our countryside’. Scottish Birds