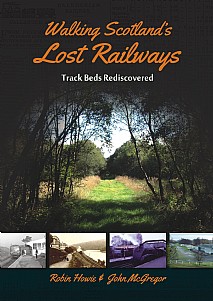 Scotland still has hundreds of miles of ‘dismantled railways’, the term used by Ordnance Survey, and the track beds give scope for many walks. Some track beds have been ‘saved’ as Tarmacadam walkway/cycleway routes while others have become well-trodden local walks. The remainder range from good, to overgrown, to well-nigh impassable in walking quality.

This book provides a handy guide to trackbed walks with detailed information and maps. It is enhanced by numerous black and white old railway photographs, recalling those past days, and by coloured photographs that reflect the post-Beeching changes. The integral hand-crafted maps identify the old railway lines and the sites of stations, most of which are now unrecognisable.

The ‘Railway Age’ is summarised and describes the change from 18th century wagon ways and horse traction to the arrival of steam locomotives c.1830. The fierce rivalry that then ensued between the many competing companies as railway development proceeded at a faster pace is recounted. Although walkers may be unaware of the tangled history of the development of the railway system during the Victorian era, many will have heard of, or experienced, the drastic 1960s cuts of the Beeching axe. However, in more recent times Scotland has experienced a railway revival – principally in the Greater Glasgow area but with new stations and station re-openings elsewhere. The long awaited 30-mile Borders Railway from Edinburgh to Tweedbank, the longest domestic railway to be built in Britain for more than a century, is something on a very different scale. Early passenger numbers have exceeded expectations and towns served by the line have seen significant economic benefits.

Many railway enthusiasts cling to the hope that more lines will be reinstated. Meanwhile, those walks offer a fascinating and varied selection of routes that can fill an afternoon, a day or a long weekend – an ideal opportunity to get walking!

Will appeal not only to a wide range of walkers but also to nostalgic railway enthusiasts.

‘…is a lovely book that helps bring many of these disused railways back to life. …is beautifully produced and highly illustrated with modern colour and period B&W photographs. …a book that is attractive enough and readable enough to inspire… …is a book we’d wholeheartedly recommend, and which we expect to be making practical use of ourselves’. Undiscovered Scotland

‘The walks range from easy to adventurous with 22 maps to navigate and 160 photographs to savour’. Scottish Island Explorer

‘Lavishly illustrated with a fascinating range of images, maps, timetables and stats, this book is packed with everything you need to know about the routes, stations, junctions and towns’. West Highland News

‘…The stories associated with the old railway tracks give an interesting perspective on the landscape…a compilation of the accounts of two people who enjoy exploring old railways’.  RSFS Journal

‘…a lovely book that helps bring many of these disused railways back to life… is attractive enough and readable enough to inspire’.  The Railway Magazine

'descriptions of over 375 miles of walks along abandoned track beds in the south central Highlands, Fife, Clackmannan, Kinross and the Borders... it is nicely produced.' Journal of the Railway and Canal Historical society