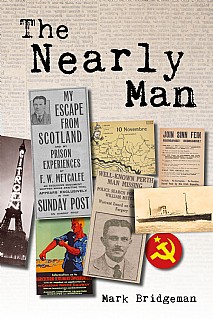 • The true story of one man's incredible journey through some of the most traumatic, yet largely forgotten, events of the 20th century

• Hero or villain? The ultimate con man or the flawed genius?

The Nearly Man is the true, yet almost unbelievable, story of one man’s incredible life, beginning in rural Scotland in the reign of Queen Victoria, and ending on the west coast of Canada in the 1970s. In one of the 20th century’s great untold stories we travel with Francis Metcalfe on an amazing journey from the great estates of Scotland to the battlefields of Flanders, and the trenches of the Somme. His associations with the soon-to-be famous and his brushes with death were followed by his heroics in the ice fields of Arctic Russia, wasted years in post-war London, and a narrow escape from being murdered by Sinn Féin in Ireland.

After a spell in prison for fraud, Metcalfe became a fugitive from Scottish Law as he engineered a daring escape to France, while the attention of the police was diverted. After hiding in Paris during the 1920s, among the ‘Lost Generation’ of writers, Metcalfe was arrested at gunpoint and thrown in France’s most notorious jail. In his own words, Metcalfe tells the astounding story of his flight from justice, his subsequent trial, imprisonment, followed by release, his second escape from the police, his capture and his decision to start a new life in Canada. . . . only to become embroiled in Communist riots, the hardship of the depression, the infamous ‘Ottawa Trek’, and the impending war.

The Nearly Man tells the story of one man’s adventures through some of the last century’s lesser- known conflicts, and his encounters with the famous thinkers, writers and soldiers of his time. But it also shows how his exploits impacted the people around him. Francis Metcalfe almost became one of Britain’s notable war heroes, poets, writers, adventurers, businessmen and criminals. If Metcalfe had succeeded, he would doubtless be immortalised in history. Instead, his incredible adventures through some of history’s forgotten events had become lost in time, until his story was painstakingly unearthed for this book.

This utterly remarkable story will be of huge interest to anyone who enjoys a good yarn or has an interest in history and its untold aspects; a different perspective on our recent history.

The King of Lokoja
Wendell McConnaha