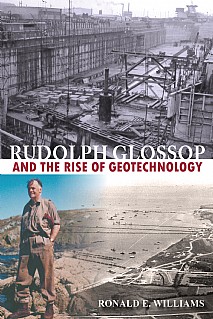 and the Rise of Geotechnology

Rudolph Glossop made a unique contribution to the early development of both geotechnical engineering and engineering geology and this volume presents a fascinating and revealing perspective on his involvement by means of selected extracts from personal diaries, letters and journals. From his early experience as an undergraduate and the four years spent in the Gold Coast to the establishment of Soil Mechanics Ltd and his time as director of Mowlems, Glossop became one of the key figures and was involved in many of the key stages in the development of geotechnology. His journal provides a fuller understanding of the Mulberry Harbour, which was a key factor in the success of the D-Day landings in northern France, June 1944; while his diaries give a unique account of the significant challenges that had to be overcome during construction of Derwent Dam, N.E. England.

The famous Skempton, in his obituary of Glossop, refers to “works of original scholarship, written with the clarity and style of which Glossop was a master … by his own example and by the example of others, he never lost sight of the importance of bringing together the practical and academic aspects of both geology and soil mechanics.”

Ron Williams has painstakingly pieced together a fascinating account of the life and career of an outstanding engineer, and in the process has painted a vivid portrait of Rudolph Glossop and his achievements. Not before time will today’s engineers and scientists have the opportunity to appreciate the achievements of one of the key figures in geotechnical engineering.

This absorbing book will be of paramount interest to professionals in engineering geology, geotechnical engineering and all those interested in their history.

‘The Early Journals provide a very clear view of the young Glossop, and I found the sections on his time in Africa and his activities during the Second World War particularly fascinating. …a thoroughly engaging read and room is left for a few entertaining social digressions. …I thoroughly enjoyed this book and the often highly personal insights that it affords the reader. This book comes highly recommended to all who have an interest in our profession…’ Quarterly Journal of Engineering Geology and Hydrogeology

‘This is an absolutely fascinating book on the early history of geotechnology... It is a joy to read his words, which often cover the contractual and people issues associated with engineering works. ... What a great read – highly recommended for all engineers – regardless of where or for whom they work’. Geotechnical News

‘Rudolph Glossop was one of the founders of geotechnical engineering in the UK and his professional life is described vividly described in this book’. ISSMGE Bulletin

‘...an enthralling portrait of the person and his part in the development of the ground engineering profession in the UK. ... The journal extracts presented ... make fascinating reading. ... Glossop’s clear narrative and forthright observations again provide relevance and interest for today’s reader... The clarity of the writing results in an entertaining and thought-provoking book’. Australian Geomechanics News

‘...paint a picture of a polymath. ... This book is an interesting collection of source materials relating to the development of geotechnology during the mid-twentieth century. It is a worthwhile addition to a comprehensive library’. NZ Geomechanics News

‘...what makes this book so interesting is that it has been painstakingly pieced together ... to paint a vivid picture both of Glossop and of the evolution of geotechnical engineering... ... it succeeds in presenting the life of Glossop in an easy-to-follow manner, and it is a fascinating read. Williams should be congratulated for placing what could have been lost writings back in the public domain for our benefit and enjoyment’. Géotechnique

'This delightful book... These memoirs are written with a wry humour and keen sense of observation...  ...the extraordinary variety of the contents of this book – each section having its own fascination’. Canadian Geotechnical Journal

'The fact that the reader is provided a unique window into the development of geotechnical engineering in the UK, through numerous diary entries, journals, letters and articles is very interesting and makes for a great read. ... in the chapter 'Selected diaries and letters', the reader gets probably the most intimate insight into the personal friendships that Rudolph Glossop had with the great names in geotechnology'. Mining & Dredging edition, Ingeokring Newsletter

A Particle of Clay
Judith Niechcial