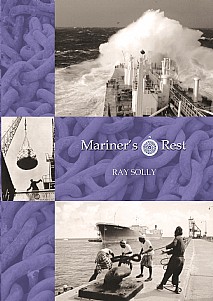 This is the well-written account of Jonathan Carridia’s final years at sea as a senior second and chief officer. He chronicles the events that led him to leave the sea before being confirmed in a period of temporary command and relates the gruelling interview processes before being accepted as a mature student.
Jonathan describes in atmospheric terms incidents in the Far East and the initial awe he experienced when joining a very large supertanker – the class of ship for which he had yearned since his early days as a cadet. Following a spate of serious accidents leading to loss of life and vessel, Jonathan’s decisive role in questioning and challenging the casual approach to maritime practices current at that time is excellently portrayed.

...Once arrangements were confirmed I relaxed completely and savoured my final couple of voyages navigating this magnificent ship as extra chief officer. ... I remained convinced that ‘swallowing the anchor’ and venturing into a new career was the correct course for me to follow. The challenges of navigation and collision avoidance, plus the comradeship I had experienced at sea would truly be missed, but other than that I would leave the Merchant Navy without regrets. It was time to move on in life and doubtless carry a raft-load of diverse experiences and countless happy memories along with me.

Thus concludes the third in the maritime trilogy by Ray Solly which will be of special appeal to those who have already enjoyed Mariner’s Launch and Mariner’s Voyage.

‘...Ray Solly translates his observations into a record of moments of madness, danger, companionship and hilarity known to all who sent to sea in the post war period. ...don’t miss this book, it really did happen this way’. Sea Breezes

‘A unique narrative ... helps capture the whole experience of being at sea. ...a very satisfying account...’ The Nautical Magazine

This true-to-life adventure story of a young man’s maritime career will ring true with many seafarers, being appreciated by veteran and young sailors alike. It also gives a detailed and enjoyable picture of the ‘golden age of shipping’ and will be of great appeal to all maritime enthusiasts and armchair sailors, particularly those who have enjoyed the author’s previous two books.

'This true-to-life adventure story of a young man's maritime career will ring true with many seafarers, being appreciated by veteran and young sailors alike. ... This is a very good read and I would highly recommend it to our readers.' Shipping Today & Yesterday

'Based closely on real incidents - but naming no real names - the story follows Jonathan as he reaches the peak of his seafaring career in the 1970s, rising to the rank of chief officer while serving on a variety of cargoships. ...suddenly a vividly-described incident will grab the reader's attention. ...here lies the strength of this book - it may not be perfect, but the author has been there and done it himself.' Nautilus Telegraph