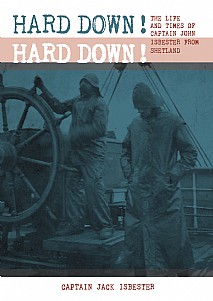 The Life and Times of Captain John Isbester from Shetland

Hard Down! Hard Down! describes the eventful life of a Shetland man in pursuit of his ambitions – to reach the top in his profession, to find a wife, to cherish a family, to do his job well and to be respected by his peers. The account is enlivened by extracts from numerous well-chosen family letters, diaries and postcards revealing the minutiae of shipboard and family life 120 years ago. These include a bachelor night out in ’Frisco, buying slippers in Dantzig and a captain who changed his underclothes at midweek because he could not remember which weekend his wife had suggested!

After four years as a fisherman in the stormy waters around Shetland, John Isbester chose to spend his next forty years in large square-rigged sailing ships from Liverpool at a time when shipping casualties were all too common. Remarkable feats of survival and tragic deaths are described with clarity and detail. Happier times are also remembered with picnics in Sydney harbour with captain, family and friends transported in the ship’s longboat, rowed by the eight apprentices.

John Isbester’s wife, and sometimes their children, sailed with him on several year-long voyages accompanied by her upright piano. Her letters provide an extra dimension, describing conditions ashore in Sydney, ’Frisco, Antwerp and La Rochelle. She also describes the birth aboard ship of her ninth child! Extracts from the diary of an observant young Scots solicitor on a voyage from Liverpool to Sydney provide many insights into the nature of life aboard a large square-rigged sailing ship on a long voyage.

The author, also a professional mariner, has compiled a record of the life of his grandfather from diligent research of shipping records held in the many parts of the world to which John Isbester sailed. Technical issues are illustrated with numerous diagrams for the reader and there are new insights into the loss of the Dalgonar and the acclaimed saving of 26 of the crew.

This historical biography will be of interest to all seafarers and everyone with an interest in sailing, ships and shipping, maritime history and memoirs.

‘The narrative and letters weave you into the lives of John and Susie Isbester… I recommend the book to all, as a good historic record of life in Shetland and the 19th Century seafarer but to those whose profession is the sea, its content will be truly understood’. The Journal, The Honourable Company of Master Mariners

'...a riveting account of the life of a man who spent years as a Shetland fisherman and the next forty in square-rigged ships out of Liverpool'. The Marine Quarterly

‘This entertaining book describes the eventful life of a Shetland man in pursuit of his ambitions… A great read that’s a real page-turner’. Sea Breezes

‘It is very thoroughly referenced. Very well produced… …this is well up to Whittles’ high standards. An absolute must tread for those interested in both the sailing era and the social history of Shetland and highly enjoyable for a far wider audience. Highly recommended’. South West Soundings

‘…insight into Shetland society and the world of trading under sail’. Yachting Monthly

‘…evokes that lost world with an immediacy that is remarkably compelling. …engaging and accessible style that makes this book a joy to read. …we really gain an insight into the world in which he lived – and across which he repeatedly sailed’. Undiscovered Scotland

‘…this powerful personal account of one such seafarer explains many of the reasons that lie beneath the heritage. It vividly explains the social and economic drivers that fuelled Shetland seafaring and delivers deep insight in the often harsh and dangerous conditions in which crews worked. His evocative firsthand accounts are enhanced by his wife’s letters… …as well as some lovely old photographs and official reports and logs. The pages are peppered with fascinating stories… …this is a moving a memorable book…’ Nautilus International

‘This is a very well written book telling a fascinating story of a bygone era and I would highly recommend it to our readers’. Shipping Today and Yesterday

‘…A fine example of a maritime biography which makes gripping reading’.  International Journal of Maritime History

‘…a beautiful book about the last chapter of deep water sailing ships...a wonderful insight into a maritime world that can still teach us a great deal about seafarers and seafaring, shipping and the sea...is a wonderful piece of work, illuminating the final years of sail in an accomplished fashion, accompanied by maps, diagrams and a clear explanation about the ships, the cargoes and how they were sailed. If I hadn't alredy read it, I would ask for it for Christmas'. Lloyd's List

‘…tells of the eventful life of his grandfather, a Shetlander who spent 35 years in the Merchant Navy’.  The Scots Magazine​

‘…takes the reader back in time 120 years, revealing minutiae of not only shipboard conditions but family life in the Shetlands and ports of call'. Bosun's Chronicle

'...I was 'hooked' and couldn't put the book down until the very last page...is greatly enhanced by the many diagrams, photographs and family letters...we have all thoroughly enjoyed the story of Captain John Isbester and his family'. Coontin' Kin, Shetland Family History Society

'...is also a social history of a seafaring family...The handsome square-rigger's story forms a large part of the book which is satisfying in its technical detail and many accounts of shipboard work and life'. The Dog Watch

'...beautifully crafted and detailed biography of his grandfather...brings to life this remarkable Shetland seafarer, it also shines a fascinating light on Shetland life at the end of the 19th century and into the early part of the 20th century...Captain Jack Isbester is to be congratulated for sharing his Grandfather's extraordinary seafaring career and for shedding new light on an era of Shetland's past'. Shetland Life