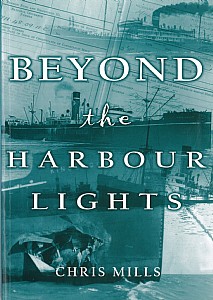 Beyond the Harbour Lights

True stories of excitement and adventure from the time when ocean steamers plied their trade to the far-flung corners of the globe.

British ships were once to be found in every corner of the world with harbours offering a safe haven to ocean-weary ships. In the majority of cases these voyages from harbour to harbour were uneventful but, with so many ships plying the world's trade routes, it was inevitable that sometimes an ordinary voyage became dramatic and full of incident. Newspapers generally had a shipping correspondent who provided a daily report of ships' movements, but if a ship entered harbour with the news of an unusual voyage, the details were quickly given space in the newspaper. In those times, the shipping news was avidly read and reports often included photographs of ships in distress along with first-hand descriptions from those on board.

The author has supplemented a selection of contemporary newspaper articles, mainly from the 1920s and 1930s, with background information from other sources such as the reports of Marine Courts of Inquiry, extracts from ships' log books, and references to crew agreements, law reports and published narratives by ships' masters. A few imaginative details have been added, but the stories are all firmly based on true events as reported and recorded at the time.

This book is ideal for anyone interested in true stories of ships and the sea, maritime history or wishing to enjoy a good read.

‘Mills portrays what conditions were like on board British merchant vessels of the time and has made his subject a most readable one’. Paul Ridgway, Africa Ports & Ships

'Each of this book's 26 chapters describes an incident from the 1920s and 1930s which affected a British merchant ship going about her business. The author, a merchant seaman from the 1960s, has taken newspaper references from around the world describing groundings, fires and other calamitous events at sea. With the use of supplementary sources ... he has pieced together details of how the weather or sea conditions led to a stranding or total loss. Clan Line's Clan MacWilliam on fire off Vavua and Iddesleigh of the Tatem Steam Navigation Co. aground off Hispaniola are just two of many incidents recorded. The author portrays what conditions were like on board British merchant vessels and he has made his subject a most readable one'. Ships Monthly

'Chris Mills has gathered together a selection of most interesting newspaper articles, mainly from the 1920s and 1930s, and then developed the story with background information to tell the full tale of what happened. ... There are 26 chapters, each devoted to a particular newsworthy story involving a deep-sea ship, and a varied collection of incidents, which seafarers of today and yesterday will appreciate'. Shipping - Today & Yesterday

'This book gives the reader a real flavour of seagoing and in its own way adds much value to a way of life now almost lost to living memory'. Sea Breezes

No Port in a Storm
Bob MacAlindin