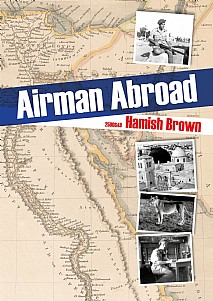 A revealing picture of a time when Britain was losing its empire. It draws on letters written at the period by an airman, his vivid memories and experiences from the Canal Zone, Kenya during Mau Mau times, Cyprus and Jerusalem. His time encompassed conducting church services, being shipwrecked, numerous wildlife encounters and the formation of many lifelong friendships.

The Canal Zone was no easy life and 50 years later a medal was awarded when the government was forced to admit it was deserved and to confess its own political chicanery in the events. Hamish paints a picture of the highs and lows of RAF life, a station being run down in Egypt, working in oppressive heat and now and then being shot at!

He saw the Windrush a week before it exploded and sank in the Mediterranean; both the Windrush story and that of building the Suez Canal are detailed in an appendix. There is much to find in this story including background histories to events and the politics of the time. As a whole it provides a fascinating account of the era.

This will be of interest to anyone interested in the RAF and the history of the time.

“That's a marvellous service you do, the two books are on my desk right now. Thank you so much.”
M.D, UK
“The book is well arrived and in perfect condition. ”
Denis, France
“I have just received the book, in excellent state. ”
Alain, Switzerland
Dunbeath, Caithness, Scotland KW6 6EG, UK T: +44(0)1593 731 333 E: info@whittlespublishing.com